You’re Gonna Love EVERYTHING “About Him!” Get The Real Deal on Brandon Karson!

Talented, inspirational, and HOT! These are the words that come to mind when you think about Brandon Karson– actor, model, fashion writer, and most importantly the star of Signal 23 TV’s hit series, About Him! Brandon hails from the grand city of Baton Rouge, Louisiana,and has always dreamed of greatness. As the grandson of a pastor, he grew up rather conservative, but shed his shell to become a rising star whose first project has been met with rave reviews and critical acclaim!

Brandon’s introduction to the world has been truly moving. About Him is told from his character, “Damien’s,” perspective, and is a  true coming of age story where he explores his sexuality his final summer before beginning college. His main love interest, however, Vince (Gary Lavard), is also his brother’s best friend. Their summer fling is rife with stolen moments, steamy hookups, and suspense so thick you will always be on the edge of your seat wondering what’s next! One would falsely assume all of this new found popularity and fame would go to his head. Instead, you get to meet one of the most humble, down to earth, and cool people on the planet. “I’m a very,  very funny guy…. really engaging, very hopeful, very passionate about everything you know.I love things that are natural…I love hot wings [he laughs]…I love clothes and I love talking to people…” However, he does admit being the central character of a series does come with a lot of pressure. “I think I get the most pressure because people who already know me don’t really expect me to be so timid and like in a jar. I have to be on point from the jump. What I love about the show is it’s kind of an evolution thing, and I had to bottle up–and I’m not a bottle up kind of guy I have to let it out! Damien’s not like that at all he’s more observant. I think that’s the hardest part.”

It is hard to believe that About Him is Brandon’s first major project. Unlike some of his cast mates who have background in theater, been involved in other projects, or gone to school for acting, he is all natural! “I have a background in public speaking. When I was about ten or eleven I actually started in church. My grandfather is a reverend and they kind of forced us into it [he laughs]. I also had one of those youth directors who was like if you’re going to be in something then you’re going to be in everything…what they would is they would give me four pages filled with things to remember…I would have to remember and orate all of that….I was in oratory competitions and all of that…The acting came in when I was acting on stage in high school and I really didn’t tap into it too much then because I actually wanted to be a model…it didn’t work out very well…I got my first background actor role when I was living in New Orleans for awhile and I was in ‘MTV’s Scream,’ and the camera went on and it was my first take and I didn’t know the hell i was doing I was literally just walked down the hallway. When that camera went off I was hooked!” 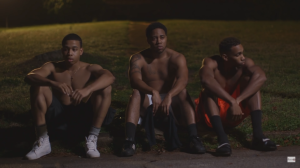 He goes on to tell us about his first day on the set of About Him: “Oh my God! My first day as Damien I was nervous the whole–the whole day! I met everyone I was shooting with and it was night time when we did the iconic sitting on the curve scene where it’s Damien, then it’s Marion, then it’s Vince and Marion’s like crying…I got to meet the rest of the cast and it was nerve wrecking, really, really nerve wrecking because you’re tryna get a feel for everybody and they all knew each other from previous projects…Gary [Lavard] and Darone [Okoli] knew each other from The Products of the American Ghetto coming out next year…but for me I couldn’t say that; I hadn’t done anything…It goes back to the pressure we talked about. The pressure came from me not doing anything..”

As we mentioned, the character of Vince is Damian’s primary love interest. His looks, body, and charm have made many fans of the series swoon. However, Brandon expresses that he and Gary have a good relationship and deep mutual respect for one another. He also discloses the two had to spend time together off camera to get into their roles. “…We knew we would be getting really intimate so Henderson [Maddox, director of About Him] thought it would be a really good idea to get us acclimated, especially since he’s going to be giving me [implied] head [he laughs] on camera or so in the next thirty or so hours…” Interestingly, although the scenes between Damien and Vince are hot, it’s his scene in episode ten, Best Friends, with “Justin,” played by Rico Pruitt that threatened to break the internet!

The scene  was graphic and contained full frontal nudity from both characters. In fact it was so intense, you could only see it uncensored on Signal 23 TV or when it was pirated on other sites! “Let me just say this the hardest part of the sex scenes is that I was celibate, and I’m still practicing celibacy, so that was the most action I’ve gotten in a while and it really just played with my emotions [he laughs]…but I can say honestly say it has shown me what I do and don’t want as it pertains to a relationship…but outside of my personal feelings I knew it was work and knew exactly what the script entailed and what was going on…” The backlash from the controversial scene has been surprising for both actors involved. “The reception to me has been like sixty percent bad. I go to parties and go out and what I love about the LGBT community is that we’re really loving, but we’re really honest–brutally honest sometimes–and it can be a little bit much, and a lot of people can take it and a lot can’t.” He goes onto admit the show has also affected his dating life and is admittedly single, despite how much “it goes down in his DM!”

About Him is easily one of the best web series out. The cast, their chemistry, and the overall cinematography of the show deserve high praise. Brandon attributes all of it to the genius of their director, Henderson Maddox, and is deeply grateful for the opportunity he has been given. He finally let’s us know what we can expect in the future from About Him. “We are touring for the season finale, it’s two hour long movie; and it goes down! There will be a Season 2. We are following Damien to college and you’ll all just have to wait and see what happens….Rico’s [Pruitt] character is also getting a spin off, About Justin… It’s About Him, It’s About All of Us.” 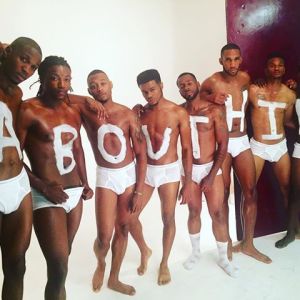 You can catch more of Damien by watching all the episodes of About Him, or meet him in person as the cast tours for the season finale. Purchase your tickets by clicking here