In More Compton News…Eazy-E’s Daughter, Ebie, is Raising Money for Documentary On His Death

Last year’s Straight Outta Compton was a straight out hit! The buzz, the quality, and relevance of the film spoke volumes to audiences nationwide. Since then renewed interest in the gangsta rap group, Niggas With Attitude (NWA) and their rise to fame. This past weekend, we saw a horrifying portrayal of one of the group’s former members, Dr. Dre in a horrifying light via Michele’le’s biopic, Surviving Compton. Now it’s Eazy-E’s turn, not to be portrayed negatively, but to shed some light on his demise. His daughter, Ebie wants to create documentary about his death and is currently raising money to accomplish it. 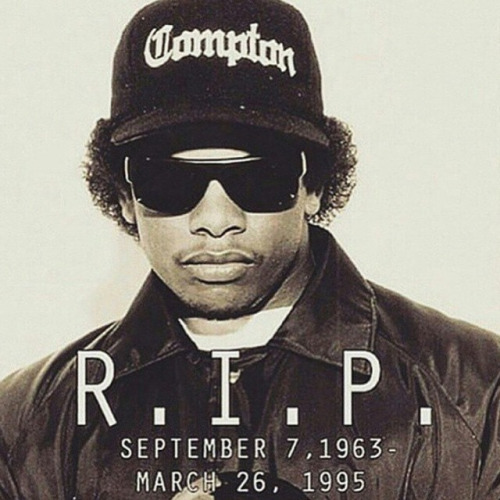 Ebie has launched a Kickstarter campaign to fund a documentary exposé titled A Ruthless Scandal: No More Lies. She alleges, 21 years after Eazy’s death, that he was murdered and wants to present what she claims are “jaw-dropping” revelations about his final days and the battle for his estate. Ebie’s mother, Tracy Jernagin, and half-sister, Erica, are signed on as producers; the three women have been working together on the film for the past 10 years. DJ Quik has also showed his support for the doc by appearing in a video promoting the campaign. At press time, the campaign has earned less than one percent of its $250,000 goal.

“The stories that we’re telling are mainly about the scandal surrounding my father’s death,” Ebie tells Rolling Stone. “But we also wanted to show his accomplishments, his personal life and, really, the aftermath of his demise and what happened to us. We never felt the story that was told to the public was the truth. It’s just something that has always pained us.”

Ebie’s allegations of scandal revolve around a 2003 Jimmy Kimmel Live!interview with Suge Knight – a co-founder of Death Row Records, the label that poached Dr. Dre from Eazy-E’s Ruthless Records – in which he speculates that Eazy could have been injected with AIDS-infected blood. She also wants to recount the controversial events of how the rapper’s estate was decided in the wake of what Los Angeles Times once described as a “deathbed marriage” to Tomica Woods Wright, a producer on Straight Outta Compton, two days before Eazy’s death.

A rep for Woods Wright did not immediately respond to a request for comment.

“People don’t know what happened to his family or me as his kid or what happened to his record label or to all his belongings,” Ebie says. “People have the perception that we were all left everything of his and his kids are good and life is peachy keen, but it’s really not. It’s really a tragic story. And it’s just time; it needs to be told.”

“[His children’s] inheritance and their legacy was ripped away from them,” Jernagin claims. “She’s lived with that. It’s hard to live life with such an iconic famous, legendary father … when deep down inside, behind closed doors, you are hurting. When everyone else is enjoying his merchandising – Eazy-E on a T-shirt is just as iconic as the Rolling Stones or Beatles on a T-shirt – it’s like other people are enjoying the fruits of his labor and his daughter is not. She has to deal with that.”

They decided that Kickstarter would be the fastest way to finance the film. “Kickstarter wasn’t our only option at all,” Ebie says. “We honestly had lots of interest.” Nevertheless, one of the rewards is Eazy-E’s “Ruthless Mafia” jacket that belongs to Ebie. “That is the only thing I have that connects me to my father,” she says. A jacket isn’t worth as much as getting the story out.”

When pressed for specifics about which facts she hoped to present in the film, especially with regard to her allegations that Eazy-E was murdered, Ebie declined. “We have to keep that for the documentary,” she said. Her mother, however, provided a macro look at what the film would present. “We want to highlight all the surrounding people and what role they played and if they should be held accountable or responsible,” she said. “This is an investigative documentary.”

The women claim they’ve lined up a few people to offer testimonials to their claims in the documentary, including Eazy’s personal assistant and one of his best friends. They also say there’s a possibility that Jerry Heller’s onetime wife, Gayle, would speak, as well as DJ Quik. They also would like Eazy’s onetime N.W.A bandmates to speak.

“We’re not accusing anyone, but maybe they want to tell their side,” Jernagin says. “This is going to be very objective. We’re not going to point fingers. We just want to present the facts and let people make their own evaluation of it.”

What do you guys think? Would you want to see this? Well we are sure she will get the funding somehow, if not Dr. Dre, Ice Cube, Snoop, or any of the other artists he mentored should be more than happy to help her out.