It’s Kung Fu Panda time AGAIN! Yep Dreamworks Animation has released another sequel in the hit franchise and we could not be happier. This time around it is a family reunion of sorts for Po as he reunites with his biological father and journeys to a secret village of filled with other pandas, much to his adoptive father’s chagrin. Although Po is happy to meet his family and others like him, especially a female panda named Mei-Mei, he soon finds there is yet another villain to take down. Herein lies the threat of an ancient evil spirit roaming throughout China and stealing the powers of kung fu masters. Po must teach the village to defend itself and take on his most fearsome enemy yet! 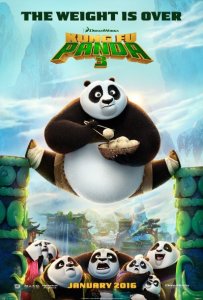 This is definitely going to be one of those films that children and adults are going to enjoy! Po and his motley crew never fail to deliver a lot of humor and a lot of action. Plus, Po’s skills have steadily improved in each movie. We are not sure if this latest film will follow any of the events of the cartoon series, but no is doubting it will be great! Kick major ancient spirit butt Po! Be sure you catch Kung Fu Panda 3 in theaters everywhere on Friday, January 29, 2016. Check out the trailer below!