New DC Comics Movie in the works!? “Batman & The Outsiders!”

Superhero films reign supreme in the box office! Between franchises headed by Spider-Man, Superman, Batman, and The X-Men alone we have seen billions of dollars spawned from these films. The hype over this genre just will not quit, and there are a slew of them coming to the Big Screen all the way through 2022. Marvel Studios has been more successful than DC Entertainment in its various cinematic ventures with the Avengers’sequel Age of Ultron debuting in theaters nationwide tomorrow. That does not mean DC is going down without a fight! Both Batman vs. Superman: Dawn of Justice and Suicide Squad hit theaters next year. Rumor has it that DC has one more super team coming soon to movies–The Outsiders! 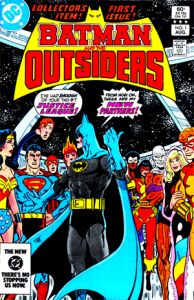 The Outsiders are a team of DC Comics’ superheroes fed up with the political correctness of The Justice League and determined to proactively dish out their own brand of justice! Led by Batman, their more aggressive approach to crimefighting has earned them the ire of world governments as well as fellow superheroes, like Superman. The line up of the team usually consists of Black Lightning, Katana, and Metamorpho; but in recent years Nightwing, The Martian Manhunter, Catwoman, and even a good version of Owlman have been members of the team. There has been no news of how this film will fit into the DC Cinematic Universe, but we know anything with Batman in it is bad ass! We will keep you posted!