It is a new day–and a more diverse one. Which is why it comes at such a surprise that a great actor like Michael B. Jordan has been met with such racist mantra and outrage over his casting as the new Human Torch in this year’s reboot of Fantastic Four. Honestly, now that we think about it this is not a surprise. Just think about the barrage of racism Amandla Stenberg for being cast as Rue in The Hunger Games, Tyrese when he hinted be the new Green Lantern, or Quvenzhane Wallis for Annie. 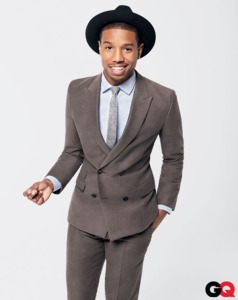 Michael B. Jordan, however, is no longer let these nasty nay sayers get to him. Via Entertainment Weekly  he penned an amazing response to those to small minded to see the power in his character:

You’re not supposed to go on the Internet when you’re cast as a superhero. But after taking on Johnny Storm in Fantastic Four—a character originally written with blond hair and blue eyes—I wanted to check the pulse out there. I didn’t want to be ignorant about what people were saying. Turns out this is what they were saying: “A black guy? I don’t like it. They must be doing it because Obama’s president” and “It’s not true to the comic.” Or even, “They’ve destroyed it!”

It used to bother me, but it doesn’t anymore. I can see everybody’s perspective, and I know I can’t ask the audience to forget 50 years of comic books. But the world is a little more diverse in 2015 than when the Fantastic Four comic first came out in 1961. Plus, if Stan Lee writes an email to my director saying, “You’re good. I’m okay with this,” who am I to go against that?

Some people may look at my casting as political correctness or an attempt to meet a racial quota, or as part of the year of “Black Film.” Or they could look at it as a creative choice by the director, Josh Trank, who is in an interracial relationship himself—a reflection of what a modern family looks like today.

This is a family movie about four friends—two of whom are myself and Kate Mara as my adopted sister—who are brought together by a series of unfortunate events to create unity and a team. That’s the message of the movie, if people can just allow themselves to see it.

Sometimes you have to be the person who stands up and says, “I’ll be the one to shoulder all this hate. I’ll take the brunt for the next couple of generations.” I put that responsibility on myself. People are always going to see each other in terms of race, but maybe in the future we won’t talk about it as much. Maybe, if I set an example, Hollywood will start considering more people of color in other prominent roles, and maybe we can reach the people who are stuck in the mindset that “it has to be true to the comic book.” Or maybe we have to reach past them.

To the trolls on the Internet, I want to say: Get your head out of the computer. Go outside and walk around. Look at the people walking next to you. Look at your friends’ friends and who they’re interacting with. And just understand this is the world we live in. It’s okay to like it.