Some shows were born to make it, and WGN’s Underground is definitely one of them. As you may already know, Underground is a period piece, centering around seven slaves from the Macon plantation of Georgia, desperate to gain their freedom. The show is executive produced by John Legend and has been met with rave reviews and conjured a strong fan base.

The show is not your typical slave narrative in the likes of 12 Years A Slave or Roots, but instead focuses on the Underground Railroad. It shows all sides of the wickedness that is slavery from the Master all the way down to the men and women who risked their lives on The Underground to help runaway slaves gain their freedom. The sheer power moves and craftiness of each character to outwit, outlast, and out maneuver their captors, even figuratively is admirable. The show is also the most social cable drama on Wednesday nights, an impressive feat considering it comes on right after Fox’s Empire. 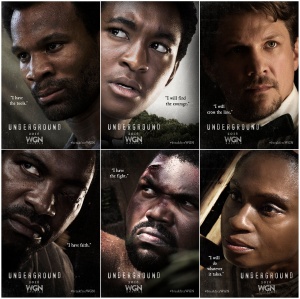 Production on the second season begins this summer. With just three episodes left this season we have to wonder what will happen to Rosalee, Noah, Boo, and Cato. Will they make it freedom? Or will they meet their fate like the other members of The Macon 7. We will just have to tune in the next few Wednesdays to find out. Kudos to WGN for producing such an awesome program!