Wonder Woman has been the most famous super heroine on the planet for the last seventy-five years. Yet, unlike her DC heroic compatriots, Batman and Superman, she has not had a single film. Some have attributed it to female superhero films not being in hot demand after flops like Elektra and Catwoman. Thankfully the movie gods realized the interpretations of those characters do not live up to the iconography that is Wonder Woman; and that the Amazon Princess deserves her time to shine. As you may already know, filming for Wonder Woman began earlier this week for its 2017 release date! What we know from the official announcement, is the film will be related to the DC Cinematic Universe. We also know it will be part period piece as Diana (Gal Gadot) will be dealing with past and present threats and that Ares, god of war, will be the villain. 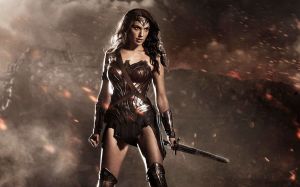 Over Thanksgiving more teasers centering on the plot of the film were released. Not only do they confirm part of the film will be based in the past, but Chris Pine will be playing dual roles. Chris will not only be Steve Trevor, but his grandfather as well. Apparently, Trevor’s grandfather (who he is identical to) washes up on Themyscira, the home of The Amazons. There, he becomes the female warriors’ unwitting ally against Ares. Unfortunately, he will leave, age, and die, giving way for Wonder Woman to meet Steve in the present. The other big teaser is that the film will further expand the DC Cinematic Universe, meaning we may see more heroes in the film! This is all good knows and we cannot wait for Wonder Woman to hit the big screen. In the meanwhile, get your fix of the heroine this upcoming March when she will appear alongside Batman and Superman in Batman vs. Superman: Dawn of Justice!