1
The Haves & The Have Nots continues to began on a shocking note as everyone reels from the investigating officer’s announcement of Amanda’s death being a homicide. Veronica quickly questions his credibility and reminds him who he is in the presence of. The officer stands by his declaration. Wyatt causes further problems when he announces he…
/ Hey Mikey! /

The Haves & The Have Nots continues to began on a shocking note as everyone reels from the investigating officer’s announcement of Amanda’s death being a homicide. Veronica quickly questions his credibility and reminds him who he is in the presence of. The officer stands by his declaration. Wyatt causes further problems when he announces he will tell The D.A., Jennifer, everything he has done including hitting Benny and Lizzie. He and Jim begin to fight prompting Jeffrey to pull him away into the kitchen. Celine tries to comfort Jim, but he rebuffs her advances. Veronica demands she leaves, but she refuses. They almost begin to fight until David pulls them apart. Katheryn blames Jim for their daughter’s death and reveals how the two of them met when she was just fifteen. They married on April 17, 1979, and she describes it as the worst day of her life. She tells Jim how much she hates him, but refuses to ever let him go as torment for all the grief he has caused her. She demands Celine leave, but she refuses. Katheryn reveals Celine has two sons with Jim, one of them is only seven years old. She demands Celine leave again, but she again refuses prompting Katheryn to attack her and drag her by her hair. She promises that despite their agreement she is fired and banished from her home. Celine FINALLY leaves! 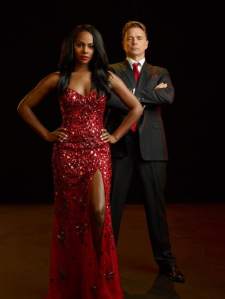 At the Sarandon Hotel, Candice receives a visit from War. There she gives him his “share” of the money and tells him to buy a suit and go straight. He is reluctant to take her advice, but is tempted to try the towing business. He tells Candice he will continue to look for Quincy. Back at The Cryers’ home, Wyatt tells Jeffrey he is going to turn himself in. Jeffrey tries to reason with him, warning him they all will go down with him. Jennifer arrives to speak with the medical examiner, before she does The Harringtons try to dissuade her from using Amanda’s death to hurt Jim. She assures them everything will be legit. After speaking with the medical examiner, Jennifer announces Amanda’s death has been ruled a suicide. Jim asks to see her, but everyone tries to dissuade him. When the coroners accidentally bring Amanda’s body down the front way Jim takes advantage of the chance to view his daughter. He and Katheryn begin to cry again. Benny answers the call for a tow and finds a beautiful woman eager to have her car taken away. She reveals she discovered her fiance was already married and it was a gift from him. She sells it to him for $500.

Candice and Landon run into each other at the bar of the hotel. There, they dish over Veronica and her homophobia. He also informs her of Amanda’s suicide. Candice quickly leaves while he orders another drink. Benny comes home to find his mother sitting in the dark. He convinces her to come outside and see the surprise he got for her–the car. Hanna is happy to have it, but still in shock from the day’s events. She tells him to take her to see Candice. Jeffrey continues to try and keep Wyatt from drinking, but he is intent on self-destructing. Jim overhears his plans to betray them. Needless to say this whole episode was over the top. However, I am glad to see Katheryn whoop some ass! Celine is long overdue for one after having not one, but two children with her husband. I guess Candice really did care for Amanda. She was definitely hurt by her death. Until next week!

PREVIOUS POST
Check It Out! Rumors of an “Empire” Spin Off! Starring Who!?
NEXT POST
Fox’s Empire Season One Soundtrack!