0
Photo Credits: Marcus Ingram for TV One When it comes to “made for TV movies” often times they are cheesy, horribly filmed, and rarely worthwhile. Just think off all the predictable Lifetime movies we  have grown up watching with the same themes, recurring actors, and villain archetypes. Well TVOne  is definitely breaking the mold in its latest film…
/ Hey Mikey! /

When it comes to “made for TV movies” often times they are cheesy, horribly filmed, and rarely worthwhile. Just think off all the predictable Lifetime movies we  have grown up watching with the same themes, recurring actors, and villain archetypes. Well TVOne  is definitely breaking the mold in its latest film for television, Bad Dad Rehab! Starring Robert Ri’Chard, Wesley Jonathan, Rob Riley, and Rick Gonzalez, the film entails the lives of four “Deadbeat Dads;” each of whom take a parenting class, “Bad Dad Rehab,” to learn how to reconnect with their children and be better fathers, partners, and co-parents. 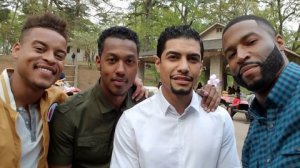 Led by their group facilitator Mr. Leon (Malik Yoba), each of their stories is moving as they struggle to balance what they want to do, need to do, and face their own “daddy issues.” This is easily a film that every man, especially fathers–good and bad–need to see.  The film does have a lot of lighthearted moments, and superbly integrating entertainment and informing the audience to social issues at the same time. There are a lot of fatherless children in our society and for many of them it is because their fathers are absentee. These are not always the stereotypical dead beat dads we hear so much about, but are instead men who do not know their legal rights as fathers.

Cast Members, Malik Yoba, and Rich Homie Quan, attended the screening, with the former leading a Q & A discussion alongside Roger Bobb right after. Apparently Malik and Roger’s film companies collaborated to create the film. The former New York Undercover star recounted his own issues and barriers with trying to be a good father to his children and took directed those with questions, mostly men and fathers about their legal rights, to an associate that could help them. He also reiterated the importance of fathers being in their children’s lives and urged the patrons to promote the film not only to bring attention to it, but to promote more quality programming as they would like to make it into a miniseries. We are definitely all for that!

Watching Bad Dad Rehab you will laugh and cry, but you will ultimately be a better person than you were before viewing it. Be sure you catch this amazing film this Sunday, 7:30 PM EST only TVOne! Checking your local listings for channels and showtimes. Check out some amazing pictures from last night’s screening in Atlanta!

DON'T MISS THIS ONE: “Fear Not!” Iyanla Vanzant’s Newest Show Empowers A World On Pause