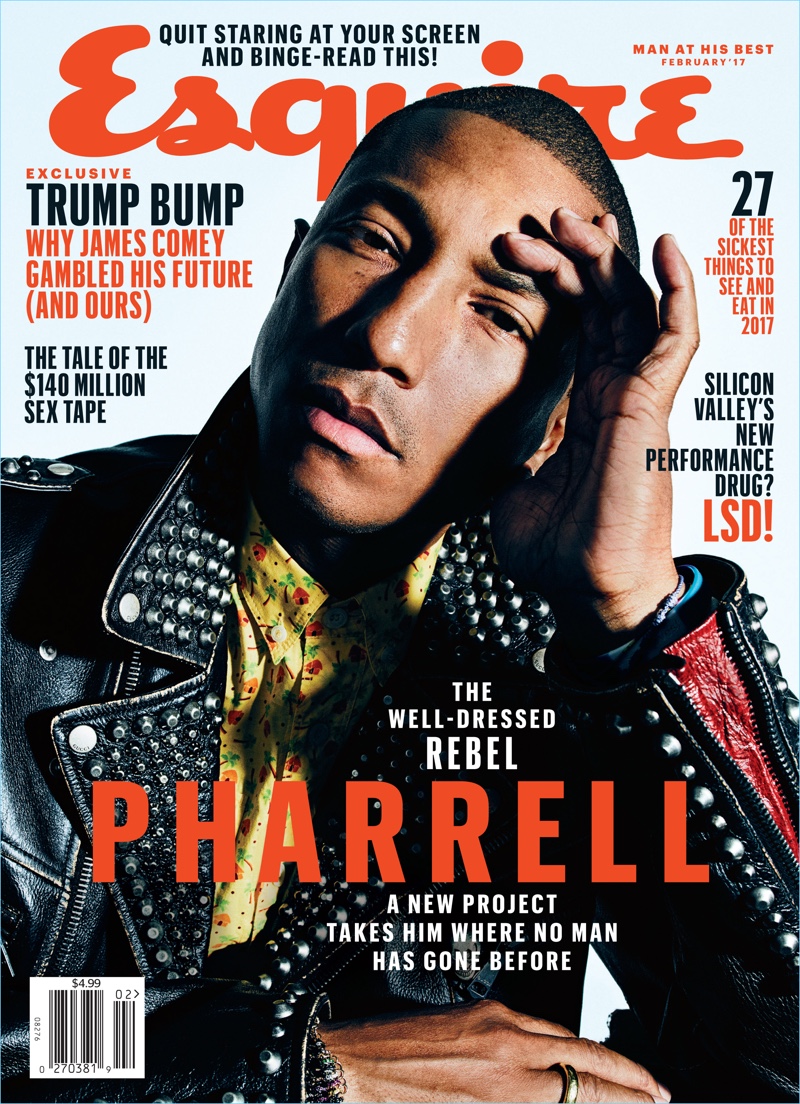 “Pharrell’s feminist inclinations fueled his latest endeavor, Hidden Figures, a film he worked on as a producer and wrote original music for. The movie tells one of those stories from the course of American history that you can’t believe has gone unheard for so long. Directed by Theodore Melfi and starring Taraji P. Henson, Octavia Spencer, and Janelle Monáe, it raises a toast to three African-American women (Katherine Johnson, Dorothy Vaughan, and Mary Jackson) who worked at NASA’s Langley Research Center in Virginia, where they played pivotal roles in America’s space race against Mother Russia in the early 1960s. Without their breakthroughs in mathematical formulas, computer programming (then in its infancy), and engineering, astronaut John Glenn may never have made it into orbit—nor would he and his capsule have splashed down successfully near Grand Turk island.”

“For decades, their story wasn’t merely marginalized; it was unknown, not even a blip on the radar. No one was listening. “The female contribution to anything significant has always been historically dismissed or discounted, or often erased,” Pharrell says. To a degree, the women were unseen and unheard within the white management structure of NASA, even while they were in the midst of making the calculations that would eventually send American astronauts to the moon. The movie has a series of scenes in which Henson, playing Johnson, has to totter frantically in high heels to a building far away from the main Langley war room because no one thought, in those last days of segregation, to provide a nearby restroom for black women. “That’s how rigged the matrix was,” Pharrell says.”

A number of factors drew Pharrell to Hidden Figures,  celebrating the unsung accomplishments of women of color was not his only focus. The story takes place in a part of Virginia that’s about twenty miles from where he grew up and therefore gave Pharrell a personal feel for the movie.

We all will be able to share in the treasure that this film will deliver on screens across the world tomorrow!

Screenplay by:  Allison Schroeder and Theodore Melfi (writing credits not final), based on the book by Margot Lee Shetterly.

HIDDEN FIGURES is the incredible untold story of Katherine G. Johnson (Taraji P. Henson), Dorothy Vaughan (Octavia Spencer) and Mary Jackson (Janelle Monáe)—brilliant African-American women working at NASA, who served as the brains behind one of the greatest operations in history: the launch of astronaut John Glenn into orbit, a stunning achievement that restored the nation’s confidence, turned around the Space Race, and galvanized the world. The visionary trio crossed all gender and race lines to inspire generations to dream big.

Tanisha Davis
Tanisha D. Davis is a woman of creativity and passion when it comes to delivering coverage on entertainment and everyday living. She serves as a contributor to the Lifestyle Department for Kontrol Magazine. She is popular for her motivational Relationship Articles, Poetry and daily words of wisdom on social media. Tanisha currently is the Creator & Host of her own personal Blog Radio Show. She utilizes it as a gate to give Local Artist & people working hard in the community a chance to shine. Her daily motto is simple: "Live Your Life Out Loud".
VIEW ALL POSTS BY AUTHOR