Seen as a visual taboo, freckled models are penetrating the fashion industry more than ever.

As freckles trend a sign of individuality, the alluring trait becomes more sought out daily. In the early 1920’s, society searched for medicines and creams due to freckles- Now we are experiencing different attitude.

The fashion industry now celebrates the uniqueness of freckled models.

In the beauty industry, we have freckles being added to popular makeup routines, in envy of freckled counterparts. Consequently, society is falling in love with freckled models. They showcase another face of beauty that was once shunned. To celebrate, we have sourced some amazing freckled models who are making a way in the industry. These models are breaking through the industry due to their corky features, positive vibes and pure determination. Check them out!

George Hard is a 20 year old, English fashion model. With signings from Marilyn Agency, Urban Models Milano and View Management, Hard is working throughout the world. His endless curls and sprinkled freckles attract creatives in the industry. Hard is being spotted walking for designers such as Munsoo Kwon, Wood Wood, Paul Smith and more. With his distinct look, George lands fashion editorials featuring alternative and urban spreads. He has model appearances in magazines such as Free Magazine, Rollacoaster Magazine and Volt Magazine.

With Marc Jacobs, Alexander Wang and Fenty x Puma as part of her breakout season, Aleece must be doing something right. The 22 year old fashion model is originally from Ontario, Canada. Signings vary, including Elite New York City, Elite Toronto and New Madison. Aleece has been spotted recently on runways for Maison Margiela, Erdem, and Philipp Plein. You can catch her in fashion editorials for American Vogue, Harper’s Bazaar UK and W Magazine. Starting her modelling journey early last year, this model has made amazing moves.

The 23 year old, Chinese model has untouched beauty. Ranking ‘Top 50’ on models.com, Jing wins over industry professionals. Her clean, fresh and natural look is a breathe of fresh air. Her agency signings have wide range. They include Women Management, METRO Models, and Uno Models. She walks on runways for top brands like Louis Vuitton, Chanel and Prada. Jing has been spotted in a recent high fashion campaign for Dior F/W 2017. She also modeled in fashion editorials for Vanity Fair France and W Magazine.

Adwoa Aboah is a British model who ranks with the top young models of our time. The 25 year old is known for her public beliefs on mental health and overall diversity. Adwoa works through her online platform, Gurls Talk. The platform empowers young women to share their views in a safe place. She leaves a positive impact on the world and young women, therefore Adwoa remains multifaceted. Signings include The Lions, Oui Management, and TESS Management. Advertising work ranges from Gap to Miu Miu. She also walked for Fendi Couture Fall 2017, Dior Cruise 2018, and Chanel F/W 2017. Adwoa’s fashion editorials include Vogue Espana, Vogue Mexico, i-D Magazine, and Love Magazine. This model works heavily in the industry, while making an impact on women in society. 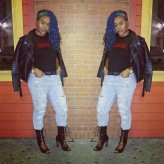 Well-versed fashion stylist and blogger based in Cincinnati, Ohio. My interests are in producing high quality content as contribution for the fashion industry.