[VIDEO] When Bollywood Meets The Caribbean–“Bazodee!”

Some of the best films in the world are indie ones! Think about it. Hit films like City of God (2002), The Rabbit Proof Fence (2002), and My Big Fat Greek Wedding (2002) are all indie films that have been critically acclaimed and proven there is life beyond traditional Hollywood studio films. The indie world now has another hit in the making when Bollywood and Caribbean culture collide in the upcoming film, Bazodee!

via Dom Brown (Publicist for the film) 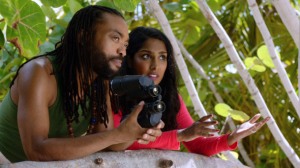 Anita Ponchouri (Natalie Perera), the dutiful Indian daughter of a deep in debt businessman (Kabir Bedi) is about to marry a wealthy Londoner (Staz Nair) when a chance encounter with Soca singer, Lee de Leon (Soca music superstar Machel Montano in his film debut) sets things askew. In search of a muse, de Leon agrees to perform at the engagement party for both families. Unable to deny their mutual attraction, Anita must now choose between the answer to her family’s financial prayers and the possibility of real love.

Set on the vivid, colorful islands of Trinidad & Tobago and pulsing with the sensuous dance rhythms of Soca music, Bazodee is the new-style Bollywood musical with a distinctly Caribbean island flavor. BAZODEE is a feel-good, 2016 HOW STELLA GOT HER GROOVE BACK with a few unexpected twists.

Montano is having a big 2016! He will be the headlining act for Drake’s upcoming OVO Fest in Toronto this summer, and he recently shared the main stage at Coachella with Major Lazer. Montano, “King of Soca”, is bring the fun, Caribbean heat to America.This movie and Machel are giving Trinidad a modern, fresh appeal and reminding us what it was like to love freely.

This film looks and sounds amazing, check out the trailer below! It sort of reminds us of a foreign version of Mississippi Masala (1991). Indian and Caribbean culture are so different, but at the same time both are colorful and vivacious. When you add forbidden love, romance, and amazing music you just can’t go wrong!