There seems to be no limit to what can be made into a movie. If Disney queens can be borderline mutants, or supervillains can save the world then surely there is room for talking food on The Big Screen. No, we are not talking about Veggie Tales, instead we are talking about their older, contemporary, Rated-R, adult counterparts in Sausage Party! We should have known with a title like that what we were getting ourselves into, but no we definitely had to see for ourselves! 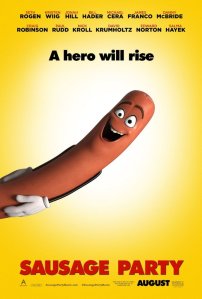 The film centers around the food at a grocery who daily praise and worship humans, who they believe are their gods, to pick them and take them to “The Great Beyond!” Of all the foods in the stores no one wants to go to The Great Beyond more than Frank (Seth Rogen) the beef frank sausage, and Brenda (Kristen Wiig), a hot dog bun. For them being chosen by a god and taken from the store means they can finally consummate their relationship–however that does not stop them from “fooling around.”

“Red, White, and Blue” is just less than a day away and they know just about every sausage and bun will be chosen. However, things go awry when Honey Mustard returns from The Great Beyond, hysterical, warning them they are all in danger. After he is re-chosen alongside, Frank, Brenda, and their friends he decides suicide is better than what is in store for them causing an accident with one of the god’s buggies. Frank, Brenda, and new friends must find their way back to their shelves, into new packages before the store reopens. Their journey is treacherous and long, fraught with questions about the gods and their benevolence, as well as being pursued by an actual, murderous, raping Douche (Nick Kroll) who blames Frank for not being chosen.

Needless to say this film is NOT for children. No child under seventeen should be permitted unless you are ready to be answer the most uncomfortable questions in parent history! These groceries do EVERYTHING people do, even the down and dirty! However, you will find yourself laughing so hard you will not care. Seth Rogen proves yet again why he is one of the funniest men in the world. Even Rotten Tomatoes is cheering the film on. Let’s hope there is a sequel in the works we definitely need to see Frank, Brenda, and the rest of the gang back in action ASAP!