“A Billboard with her face larger than life in Times Square, I’m just so moved! To all of you who have supported me all these years, it’s because of you that I can help make her dream come true.”

On Thursday, January 9, Tyler Perry held a VIP screening of his new Netflix film, A Fall From Grace, at The SCADshow Theatre in Atlanta, GA. Tyler’s words reflect the essence of his message to an eager crowd of celebrities, media personalities, and special guests in the jam-packed theatre.

As Tyler retires his Madea persona, questions arise about his ability to maintain the interest and attention of his loyal fans. A Fall From Grace answers that question, affirmatively. Starring some of black Hollywood’s strongest lead actresses like Phylicia Rashad and Cicely Tyson, the movie follows a newly divorced woman named Grace (Crystal Fox) who finds refreshing love in a young man named Shannon (Mehcad Brooks) carrying deep secrets. After things come to light, they take a violent turn. 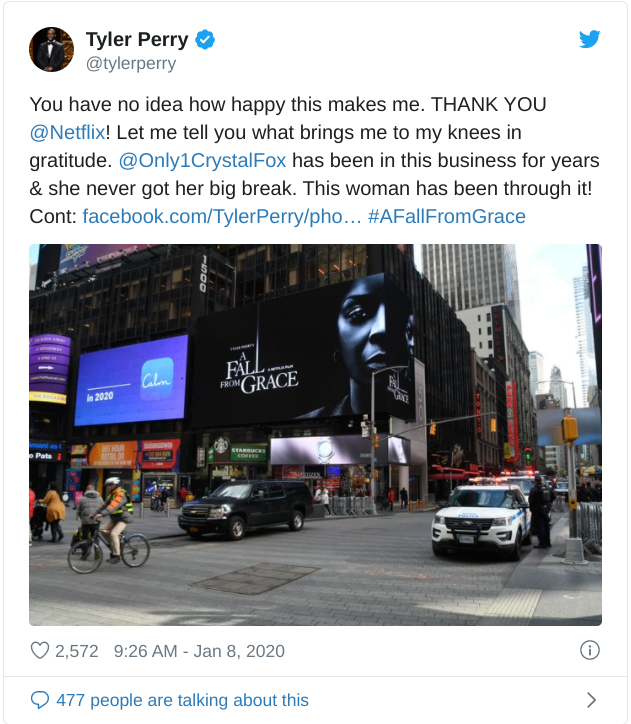 While Crystal Fox fights to prove that she didn’t murder her husband, Tyler Perry is fighting to give Fox’s career the platform it deserves. In a sincere speech, Tyler encouraged the crowd: “Don’t let anybody talk you out of your gift. Don’t let anybody talk you out of what you are called to do.” Crystal Fox may not be a name you know, but her life embodies those words.

Crystal Fox began her professional acting career in the late 1970s. She is best known for her role as Police Officer Luann Corbin in the series In the Heat of the Night (1988). She landed some theatrical roles, including “For Colored Girls” and “Everybody’s Ruby”. Millennials were introduced to her in 2013 when Tyler Perry cast Fox as lead “Hanna Young” in the OWN soap opera The Haves and the Have Nots.

Congratulations Crystal Fox! The Netflix original film directed by, written by, executive produced by and starring Tyler Perry is set to debut on the streaming platform on Friday, January 17.