#KontrolReads A THUG AND A GENTLEMAN Misa’s Story by Mona 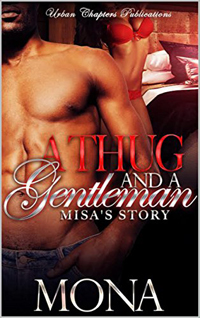 A THUG AND A GENTLEMAN

“Sometimes the most dangerous things are the most beautiful.” – Misa

Like the old saying goes: two wrongs don’t make a right. But for Misa, who’s unhappy in her marriage to Jason, two wrongs make for a happy life. Jason works tirelessly to give his wife everything her heart desires, but all she wants is his heart. While engaging in a little retail therapy, she runs across Thomas, an up and coming kingpin with a degree from Georgia Tech. They start a friendship that quickly turns into something more, and Thomas gives Misa everything she misses at home. But when her deception begins to hit too close to home, she takes off to Chicago to clear her head.

Thomas sees women as stallions; the freakier they are in bed, the better. He needs someone who understands his stamina and can go along for the ride as long as she knows her place in his life: temporary. Misa ignited a fire in him that he thought died a long time ago with his daughter’s mother Brielle, who left him and Atlanta with his friend Ricky after dropping their daughter off at his mother’s house.  When Brielle suddenly reappears out of the blue and wants her family back, Thomas has a choice to make between the woman who bore his child and the woman who holds his heart.

Brielle has a few secrets of her own. Once she touches back down in the A, she finds the family she thought she had moved on without her, and Thomas’ time occupied by a mystery woman. Using a little conniving mixed with a lot of feminine tricks, she discovers who stole her family and sets out on a path to destroy her enemy. But will her plan work, or does it backfire on her in the worst way?

Misa meets a stranger in Chicago who consoles her in the most perfect way while reminding her of what’s important. When a few weeks in the Windy City turn into a few months, the perfect affair morphs into the perfect storm. Will Misa weather the storm with her husband, or her side piece? Follow along as she finds out the hard way to love the one you’re with and Misa’s side pieces tell the age old tale of ‘When Loving You Is Wrong, I Don’t Wanna Be Right’.

Interview with Mona aka Freida

Where do you get your information or ideas for your books?

My inspiration comes from growing up in the inner city of Chicago. I also get ideas from what is current in the news on any given day.

When did you first start writing?

Honestly, I started writing at the age of seven. My teachers recognized my skill early, and I was always the unanimous choice when it came to picking a student to send to composition competitions at the city level. I saw it as a day out of school with no consequences. I read a lot, and by the age of nine I started writing short stories.

I love writing fiction books! My books are mainly urban fiction, but I’ve also penned an urban erotica read with one in the works.

How many books have you written and which is your favorite?

Currently I have ten books and co-authored three anthology series published. My eleventh book will be available this month, and I have a few projects that I’m working on with some great authors.

If you could spend a day with one of your characters, who would it be and why?

That’s a tough one, because most of my main characters are women who are strong in their own right. If I absolutely had to choose, it would be Athena from my Chi Town’s Queen series. Not your typical queen pin from the hood, there were two sides to her: the ruthless queen of the criminal underworld, but she also was very loving and caring when it came to those close to her.

What do you think makes a good story?

Any advice for aspiring authors?

Throw away any preconceived notions that you might have about the industry, not every authors reality will necessarily be yours. Develop a thick skin, because readers can be vicious in their reviews. Meditate, pray and meditate some more. Then turn on your laptop and create your best work.