In recent years, vaping THC and tobacco have risen in popularity amongst Canadian teens and young adults. While it’s hard to pinpoint exactly why the trends introduced the conversation of whether or not vaping is safe.

People have been smoking tobacco and marijuana for thousands of years. Tobacco use was first reported 8,000 years ago, with evidence of its cultivation from Mexico around 5,000 years ago. 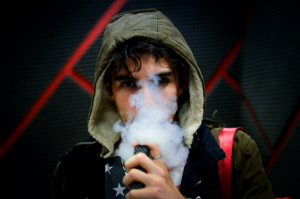 On the other hand, vaping tobacco and THC has been around for less than two decades. But, as we know, just because something is new doesn’t mean it’s bad or unsafe. It’s just less well understood.

Weed vaporization is growing in popularity among people interested in consuming cannabis in a safer, more inconspicuous way. What makes vaping a healthier alternative to smoking is that the process doesn’t involve combustion or burning cannabis, leading to the release of harmful tar and carcinogens.

Instead, vaping involves the heating of cannabis concentrates to a temperature where phase transition occurs from liquid to vapor—the active compounds turn into vapor.

You can use different forms of cannabis concentrates like wax, hash oil, shatter, or live resin, and in some cases, dried flowers. The high from vaporizing flowers may not be as strong as vaporizing concentrates, but it offers good old-fashioned weed bud taste and effects. However, users who vape with the flower reported more instances of throat irritation.

There are many ways to vaporize weed, of which the three primary devices are tabletop vaporizers, vape pens, and portable vaporizers.

Vape pens are the type of vaporizers explicitly designed for cannabis distillates and oils. They resemble a traditional pen and consist of two pieces—a battery and a cartridge. Users must load the vape pens with pre-filled vape cartridges before use.

Vaping has been drastically rising in popularity, especially among teenagers. According to a study, 37 percent of high school seniors reported vaping.

However, the US FDA has warned consumers to stop using THC vaping products due to reported lung injuries, possibly following its use. Health Canada also responded to this problem by warning Canadians to consider not using vaping products like vape juice and bootleg cartridges unless they come from a legal distributor, whereas in the U.S., THC is still illegal.

It isn’t clear if or how vaping truly leads to lung trouble or at the highest risk of vape-related illnesses. Nevertheless, scientists and doctors think they might have uncovered a potential causative agent—vitamin E acetate—found in all samples taken from the lungs of 29 sufferers of EVALI.

Vitamin E acetate is a thickening agent used to dilute THC oil in underground-market vapes. The resultant vape product is much weaker than its traditional counterparts. Instead, it might be the additives in the underground market that is harmful.

While concerns are understandable due to its relative newness, the regulations in place improve the safety of vaping THC. This is why it is imperative that users buy vape juice in CA, free of vitamin E acetate, from a legal distributor that is regulated by the Canadian government. Otherwise, the risks of a mishap or aversion are significantly increased.

Vaping is widely considered a healthier way to consume cannabis than smoking. As vaping doesn’t involve combustion, it eliminates harmful carcinogens and tar from the vapor. It is also thought to help some people stop smoking.

Should Vaping Be Seen As The Lesser Of Evils?

There is still much unknown when it comes to vaping. The only way to learn more is by reporting vaping-related illnesses to the FDA—let them know if you face such a problem. Until there’s more information about vaping and its potential side effects, you should always think twice before using vaping products.