In the latest bout of Blac Chyna and Rob Kardashian news, it seems Chyna has done an exclusive interview with People Magazine where she reveals not only does she feel “relieved” of Rob Kardashian, but discusses living in Kylie Jenner’s house!

via Love B. Scott

Blac Chyna spoke to People for an exclusive interview shortly after her volatile split from Rob Kardashian and revealed that they had actually been broken up and living separately for MONTHS prior to Rob’s Instagram outburst.

In fact, Chyna says that they only lived together for two months during her pregnancy because he ‘stressed’ her out.

Sitting down with PEOPLE in the living room of her six-bedroom Los Angeles home, the model and Lashed Cosmetics entrepreneur opens up about remaining dedicated to Dream, her 8-month-old daughter with Kardashian, and King Cairo, her 4-year-old son with rapper Tyga.

Being happy hasn’t necessarily been easy for Chyna recently after Kardashian, 30, took to Instagram and Twitter on July 5 to post nude photos of her and accuse her of cheating and using drugs. But after being granted a restraining order on July 10, Chyna is ready to focus on the positive in her life — and help others who’ve experienced similar retaliation from exes.

“Words are words, but once you start posting actual pictures, then that’s just not right. It’s actually against the law,” she says. “If I was to go and do a very artsy, high-end photo shoot exposing my breasts, that’s my choice. This is my body. It’s my right. Once somebody else does it, it’s just not right. I’m hoping that somehow, some way, this will let [more people] know, ‘Don’t do it.’ ” 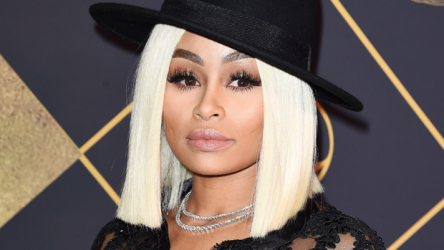 Chyna says women have approached her both in person and online since her July 10 court appearance to let her know that she has inspired them to take control.

“I just want to voice my story — voice what’s real — because at the end of the day, the person next to me could possibly be going through the same thing. For people to actually look up to me really means a lot. These types of things, they happen every day. A lot of women, they don’t address it. See it, recognize it — but don’t be tainted by it. Just be strong and positive.”

Chyna admits she is concerned about Kardashian’s social media rant – but only to a degree.

“When somebody that’s actually been the closest to you says these things, other people are going to believe it,” she says. “But the people that I actually care about, my family and friends, they’re all I worry about. I’m not going to sit here and hide in my house over somebody else being hurt or jealous or insecure.”

Chyna is steadfast in her belief that there is “no turning back” in regards to her romantic relationship with Kardashian.

We are definitely no fans of Blac Chyna or most of The Kardashian-Jenner Clan  for that matter, but we do have a lot of sympathy for Rob. The guy clearly got duped and even if he and Chyna were no longer together we believe they were still sleeping together and doing what couples do. Their alleged “months apart” did not stop her from charging nearly $300K of jewelry on Rob’s credit cards just weeks before his IG blow up. Sorry Chyna we are not buying the victim act! You can check out a few clips from her interview below. Happy viewing and tell us what you think of Blac Chyna’s latest tirade in the comments section below!

PREVIOUS POST
Did You Go Natural For Yourself OR The Gram?
NEXT POST
NBA Player Chris Paul Unveils His New Capsule Collection

Got an Upcoming Wedding in 2020? Best Summer and Fall Wedding Colors to Try!
2 Comments

The Ultimate Mompreneur Summer 2020 Must Have Guide