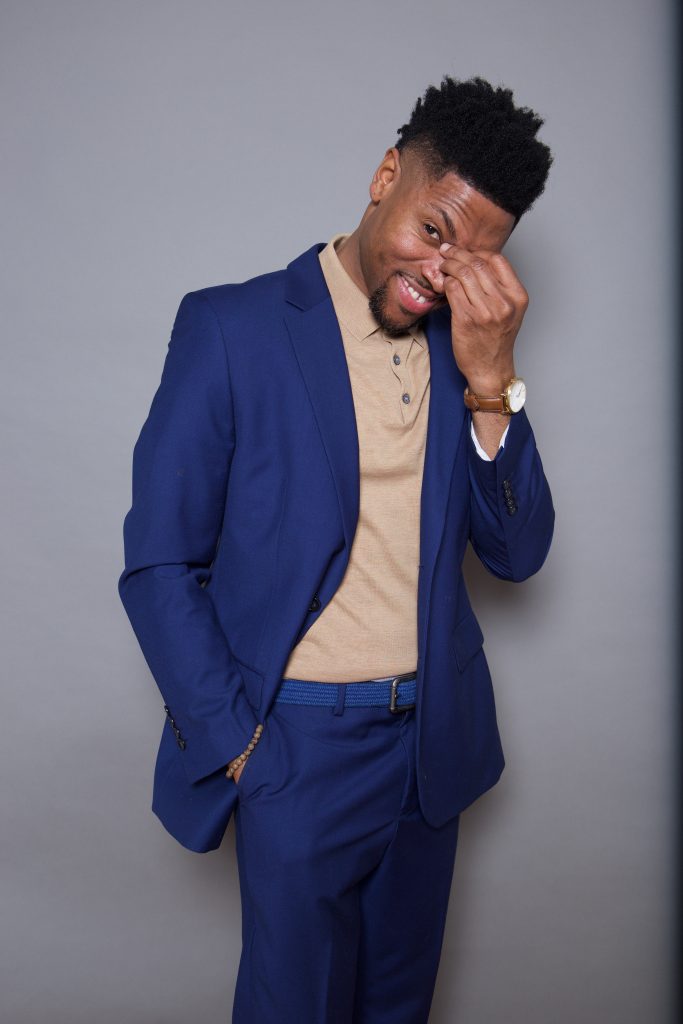 Multi-talented London Brown is ready to conquer 2019 while reflecting on a historic 2018.

Between his worldwide comedic tour, filming HBO`s hit show “Ballers” alongside star Dwayne Johnson also shooting and starring in his very own film “AsiaA” and let’s not forget the book he is currently in works on plus looking fly at the same time! We had to know the tea on his life and see if he could drop some Gems on us so we can keep up!

London Brown, you are an Actor, Comedian, publisher, dancer & radio host where do you find the time to balance your international stand up tour and star in your own movie as well as keep up as an original on “Ballers”?

“For me, I try to keep things in order by doing them in my “down time.” Downtime, meaning, when I get in from working comedy clubs, I study for an audition, type up my replies to an interview (like this)… At times, things can get overwhelming, but I’m always sure not to complain because this is exactly what I asked for.”

Congratulations! You won Best Actor in short film AsiaA at the overcome film festival how was your experience starring in the movie and winning this award?

“Coming from Ballers, I was looking to take on projects that showcased other sides of me to avoid being type-cast. This film was a great project because it pushed me as an actor on a few levels. This story was based on the direct’s life. So, I was able to have a direct resource of the trauma that occurs from this kind of fatal accident. As an artist, that’s the end goal, to grow. The growing happens from being stretched to these emotional and grounded levels of the roles we take on. The director challenged me to dig deep emotionally to connect to the truth of this character.”

“Ballers” is most definitely fans favorite on HBO  you play Reggie. What are some funny, memorable experiences that occurred while filming on set?

“Some of the funny moments are when they allow Rob Corey and I to improvise in a scene because of each take, we say something different. This keeps the energy of the scene alive and also says that the directors trust us as actors. So that’s always appreciated.”

Forbes named Dwayne Johnson the highest paid actor in History how does it feel to work with Dwayne Johnson and vibe off each other during your scenes on “Ballers” since season one?”

“Dwayne is an incredible guy. Very humble and focused. This energy on set allows everyone to relax and focus on creating a fun season that fans will enjoy. However, he definitely is a force. He has so much presents; you can feel when he is on set. It’s wild. But he always keeps us very grounded and approachable. I can say I have for sure learned some things that I will apply as my star rises. That alone has made this whole experiment of Ballers worth the journey. ”

Season four of “Ballers” wrapped up in October, will there be a season five coming in 2019 and if so what are somethings the fans can anticipate?

“Going into season five, I think fans can expect us to circle back to football. These past couple seasons the writers explored the ideas of extreme sports and so forth. But the base of the show is football. We have great producers on the show who like to keep the fans interested. So this season should be a good one and of course have more great cameos. ”

On all your appearances you are always looking A one, How many Can Rock a red suit as nice as you! What are some tips you can share on how to dress and stay fresh & so clean?

“Always be true to your self. This means learn to be comfortable with yourself. And this consist of accepting your flaws. If your core ideas about yourself are solid, it’ll reflect in how you look in the clothes you wear. I’m aware that most guys aren’t thinking this deep when they decide to get dressed in the morning but this has been my mental process for a while. And I think people feel my energy when they are around me. I won’t leave my place until I feel completely comfortable. If not, it will effect my energy. And that is the last thing I want is to not be present because I’m in my head about what I have on. So, for me I like to be consistent. Our reputation is based on our consistency. Pulling pieces is knowing how to decide what works blessed based on the event you are attending. I look at an outfit as a cast from a theatre production. I decide which clothing article will be the star and which others will be the supporting cast. This helps create a focus for the chosen look.”

On your Instagram, you shared a photo from a shoot you did for a magazine. You shared in the caption you “styled yourself …. coming soon “is there something happening soon with you and the fashion world?

“I move in anticipation. So for the ideas that I have in mind, I have been preparing for a while. To your question, yes there are things in motion. Keep a lookout and know that “I spoke it into existence.”

KontrolMag heard you are currently working on a photography book and proceed from the book will go to homeless shelters. Can you tell us a little bit about the book and your journey thus far?

“Basically, I recognize that the homeless are people too. And any of us can be a job away from being in the same position. With this book, I want to do my part to help others less fortunate as well as display another angle of my self as an artist. This was encouraged by my close friends. I want to exhaust the possibilities of the gifts I have while giving back. Out gifts are not for us. But for others.”

What advice would you give an aspiring actor and entrepreneurs?

“Do the thing that makes you happy. Don`t worry about the money. That will come. Stay focused and anything that doesn’t line up with the end goal, negate.”

What is something you can share exclusively with KontrolMag and your fans that we will look forward to heading into 2019?

“I’m on tour right now doing stand up. So expect me to visit your city and come out for laughs as well as anticipate some films to drop this year. Totally different from the character I play on Ballers.”