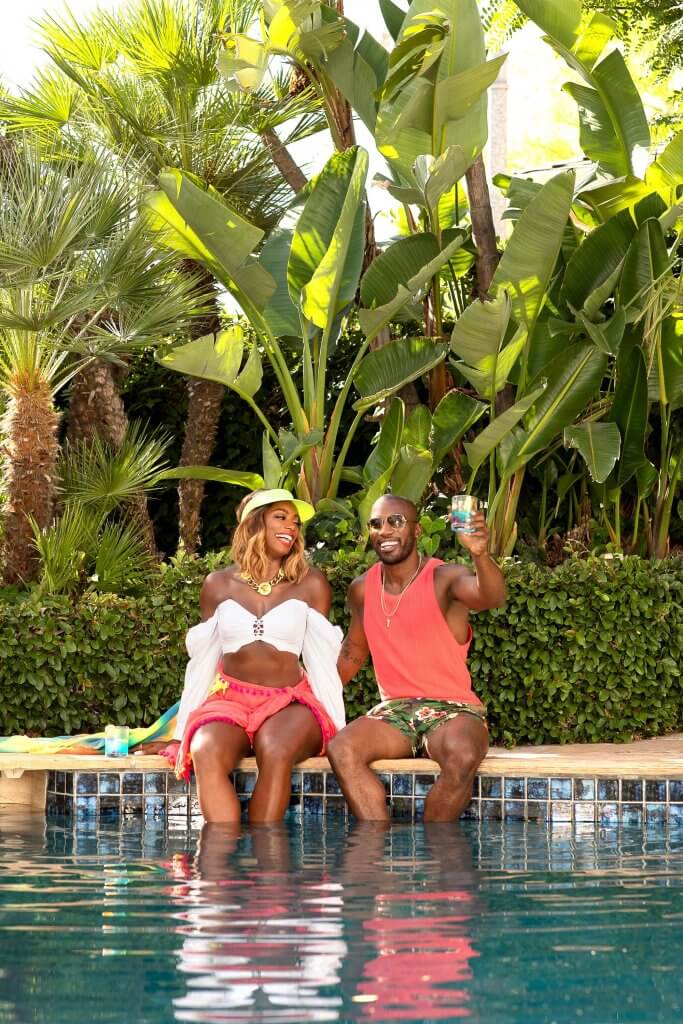 A blend of transitioning between four different households and two families was international TV personality and producer, Tai Beauchamp’s, introduction to a world she would become destined to explore every inch of.

Now, the Newark native is pushing past the boundaries and tearing down familiar territories of where she’s already been and what she was born into with new CLEO TV series, Lens of Culture. Beauchamp, joined by friend and well-renowned celebrity photographer, Elton Anderson, are joining forces to give viewers a cultural, adventurous and life-changing experience into the week-to-week of a true peripatetic.

Anderson, who unfortunately couldn’t join us for this interview, has become one of Beauchamp’s closest friends after a six-year period of casually being acquainted through passing. The two were individually picked to come on board to this new series idea from their influential contributions to the traveling world, being genuinely gifted within their independent crafts and more importantly their undeniable chemistry that could beam through any room. “I love Elton Anderson. What was interesting was that Lens of Culture was actually supposed to be a ten-minute special. It was supposed to be a branded content show and not a full-on television show. When they put Elton and me together, appearing on another show on the network, Chef JJ’s show [Just Eats], they saw Elton and I’s chemistry for the first time and then ordered a full show as a result of this. It was nothing but God that this show came about the way it did, and I’m really grateful for it. Elton and I just had a fantastic time, we bonded and connected immediately. Lens of Culture is the story of two strangers coming together and ultimately for no better way of putting it, fell in love and found a relationship, a real partnership, a real friendship, and a real brother and sisterhood.”

From Harlem to Philadelphia, Louisiana to Los Angeles, and Ghana and Puerto Rico, Beauchamp and Anderson visit an array of destinations to dive into a versatile pool of human interaction, food, attractions and memories instilled in their photo albums forever.

Tai’s most memorable journey, would come to be the duo’s trip to Ghana, one of the 11 countries she visited in Africa throughout her lifetime and where she met a young girl named Mary on Ghana’s Cape coast; the same name of her maternal grandmother who had recently passed during the filming of the show. After leaving and never expecting to see Mary again, she was surprised by Elton who found Mary 15 minutes away from their previous destination. Beauchamp’s connection to Mary, which she felt was a sign from her grandmother, would result in her and her mother and through helpful interpretation from Ghanian tour guides, setting up for Mary to attend school and fulfill her education. “I really took this show because I want young women, young black girls from Newark, Harlem, Atlanta, Compton, Houston, Dallas, from Detroit, to recognize that from where you are from and where you hail from doesn’t necessarily have to be your end. Your start is only the beginning of the narrative you’re starting for yourself, and where you want to end up and that can be anywhere in the world. I want young girls to see themselves and know if they want to make it to China or they want to make it to Australia it’s possible.”

“Lens of Culture is the story of two strangers coming together and ultimately for no better way of putting it, fell in love and found a relationship, and a real partnership and real friendship and a real brother and sisterhood.”

However, Beauchamp wants a wider audience to gain from the benefit of investing in traveling. She encourages Millenials to flip their desires for a designer bag that’ll be replaced in a season into creating and adding monthly to a travel fund.

Our younger generation may also be tied into thinking everything has to be done with a crowd; whereas Tai believes solo trips are a must. Beauchamp wants others to take advantage of research and what technology has to offer; with day-to-day curating apps of your upcoming trips (i.e. Hero Traveler), finding effective travel agencies and tour guides, local interaction and simply knowing the best and most affordable time to take flight. “Don’t just look at it as a travel fund to relax and unwind, look at is as a space for personal development and professional development. If you stack away $150 a month for a travel fund you can go on two amazing vacations a year! The other thing I think is important as you travel the world is don’t stay at the resort, spend time with the locals. Don’t do it just for the gram, turn your phone off. Millennials are traveling, but are you doing it just for the picture? Do it to have a monumental experience that helps to elevate who you are and expand your knowledge. When you travel it is your responsibility to come back and share that. If you do share that on social media great, other young people or friends, talk about the places you’ve been from the standpoint of here’s what I learned. Here’s how I’m better.”

While rapidly scratching off places she makes it a priority to visit from her bucket list, Tai has high hopes to continue seeing parts of the world she hasn’t yet been embraced by. She shared her excitement for getting to Australia soon, or exploring the eastern side of Europe and someday reaching the top of the Great Wall of China. “Quite honestly there is no place on Earth I wouldn’t go. I’m just one of those people who are excited to connect with humanity wherever that is.”

The human connection remains her motivation in a passion that has opened many doors for her. She says she wants those hesitant about stepping out of their bounded comfort zones to become unafraid and to be a part of changing the narrative for our most prized geographical possessions; African being number one. “That [Africa] is our home, and secondarily, Africa isn’t just the future, it is the now. When we talk about the global economy, when we talk about global impact, when we talk about connectivity to the world–when we activate African we are going to see something so different happen in the world.

Through 14 years of entrepreneurship and building her brand, Tai Beauchamp has remained grounded through three key concepts: faith, physical, family, or what she calls her tribe.

“Millennials are traveling, but are you doing it just for the picture? Do it to have a monumental experience that helps to elevate who you are and expand your knowledge.”

A five to seven times a week workout, at minimum, starting every morning with a prayer and much-needed meditation has become her centered peace for a career that always has her on the go.  People don’t realize when you’re actually in production call times are at 5:30 in the morning and we don’t wrap until 10 at night. The other thing is my spiritual practice is very important to me. I wake up every morning and I fall to my knees in prayer. If people follow me on social media and they look at my stories the first thing every morning is a picture that goes into my stories, and devotionals and I often go live. I stay in prayer, I meditate. Also, my tribe, that’s what keeps me grounded. I’m not always grounded physically or environmentally; for the last five and a half months I’ve been on a plane weekly, multiple times. So, it’s creating a routine for me to keep me grounded. My faith and spirituality are one, my physical, making sure I’m focusing on my health and well being and meditation and prayer, and then my tribe, my family. My faith, my physical, my family, my tribe.”

For those interested in following in Tai’s traveling footsteps, the multi-faceted opportunist will be launching an online e-learning experience called “Beyond Ready.” The program is a multi-platform experience and course aimed to teach women and men the confidence that they need to travel, fulfill their purpose, develop strategic planning and to live a life that is full.

Elton and Tai will also be continuing their collaboration on new projects outside of Lens of Culture, to allow more of an outside looking in perspective of the bond they’ve created through simply doing what they love.

Keep up with Tai Beauchamp and Elton Anderson on Instagram @taibeau & @eltonandersonjr.