“Everything, Everything” Illustrates Love At Its Purest Form!

I had one of the biggest epiphanies I’ve experienced of my adult life watching the Atlanta screening of Everything, Everything.

Life affords all of us scars and delivers packaged fear by way of experience and heartbreak. While watching this beautifully shot film based on a simple but beautiful young adult novel with the same title, I was suddenly aware of how much life and more importantly my life’s experiences robbed me of faith and hope in the greatest power we as humans possess. The film reintroduced me to the young girl I was before I’d experienced my first kiss. Back to a time when my only reference of how magical it felt to be held or touched was in daydreams or when I went to sleep and was lucky enough to dream the entire night about the boy I had a crush on. You know those magical butterflies that let loose in your stomach whenever your eyes catch the sight of your crush? The same butterflies that flutter and swirl until your palms are sweaty, you can’t breathe and your mouth is dry, so you to pick at something as minute as a random curl in your face trying not to look silly. While it sounds ridiculous, I remember all of that as being absolutely delicious and Everything, Everything re-introduced me to that feeling. It was 96 minutes of kismet, an hour and a half in a time machine transporting me back to a time when love was innocent, it was undeniably beautiful and it was everything.

Initially, I attended the screening expecting to be inspired by the excellence of Black girl magic present in the film. Directed by a gifted Black woman in Stella Meghie, starring an amazing Black woman in Amandla Stenberg and written originally by a talented Black woman, Nicola Yoon, I expected to leave the screening boasting and bragging about #blackgirlmagic and how my sisters as a whole dominated Hollywood less than two years after we cried about Oscar snubs and Golden Globe exclusions. Instead Everything, Everything didn’t act as an underlying testament to black women’s superiority, no the message was far bigger than that. The message of Everything, Everything was love and love isn’t exclusive or restrictive. It has no boundaries, no color, no creed. It doesn’t brag or yell or “stunt”.  It’s simply Everything. 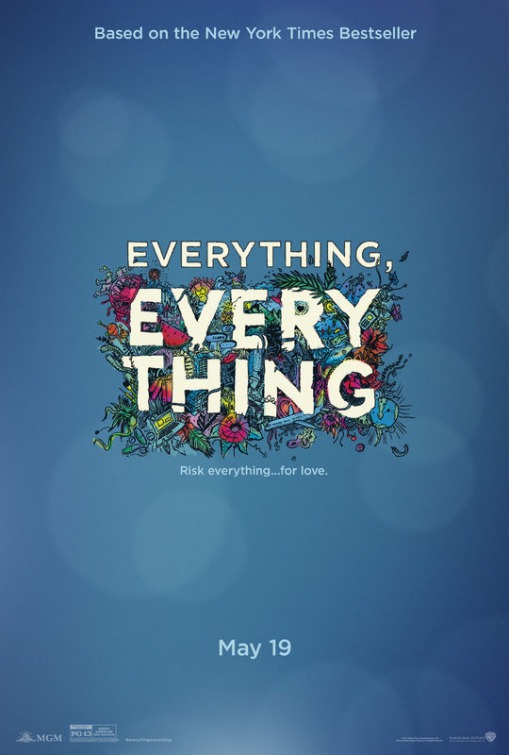 The movie’s main character, Maddy (Amandla Stenberg) is a colorfully creative 18-year-old who is told she can’t leave her house because of a rare immune disease. Olly (Nick Robinson) moves in next door with his family and is immediately intrigued by the beautiful girl in the window that never leaves the house. Olly is dealing with his own limitations living in a home ruled by domestic violence. The two form a spiritual connection through texts and speaking through their glass bedroom windows. When their love is threatened, the teens follow the instinct of their hearts embarking on a journey that could cost Maddy her life, but she deems following her heart worth the risk. Because we see the story through the main characters brilliant acting, we are distracted from the things that normally would be apparent. The fact that Amandla, a biracial actress is the love interest of a Caucasian male is totally irrelevant. The fact that her mother, Anika Noni Rose is obviously very successful in her career and is able to afford an opulent lifestyle is of no interest to the viewer. No, the viewer is instead pulled into the very essence of untainted love at its finest between two young people who known nothing but that their heart yearns for the other.
“Both of us are tired from losing sleep because we talk on the phone all night. … But I would rather talk to him than sleep,” Maddy explains to her mother in one of the most touching scenes of the film. The chemistry between Maddy and Olly draws you in and holds you captive. It reminds you of a time when you didn’t know any better than to believe. A time when color wasn’t as important as the feeling you got in your stomach whenever that certain someone was around. Love doesn’t tally paychecks or annual salaries, it doesn’t care if you have great credit or an unfavorable debt to income ratio. It doesn’t choose the submissive over the strong or embrace the wealthy over the middle class. It’s unbiased, without regard to social status or even social media likes. It conquers all. It trumps the cruelest of intention and eclipses the deepest rooted fear.
Everything, Everything reminded me of this. If I was being completely transparent, I could admit that perhaps I’d gone so far from that girl that embraced an innocent love that Everything, Everything taught me that losing that hope is the greatest failure of all. I hope we will encourage our young women to see this film but not just them, but young men also, and older women and older men and everyone … because regardless of who we are or where we are in life or what we’ve been through … love is Everything.
PrevPrevious
NextNext