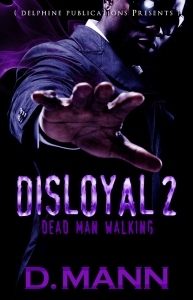 Synopsis: In part two in the Disloyal series by D. Mann, Menace’s search for his would be killer becomes the least of his problems once murderous dirty cops pick up his trail. Menace’s departure from the underworld is prolonged as he looks forward to his wedding day and the birth of his first child. Under threat of imminent death, old and new friends rush to the aid of Menace but will it be enough to save him.

They were nearing the end of the pathway number seven when Mills stopped directly in front of the alley number eight outlet and the side door slid open. Khalil slithered out of the door armed with an Ak-47 and squatted near the rear of the van.

Menace and Darlene could see the van parked on the next block with Khalil hiding behind the rear of the driver’s side. Menace looked over at Darlene. Her face indicated something was wrong.

The mixture of flowing red and blue lights getting stronger as they glimmered against the waiting black van and Khalil hiding at the rear were signs of imminent danger. Menace and Darlene cautioned themselves as they entered the last alleyway.

Menace drew both pistols when he saw the lone police car slowly cruising towards the van taking strict inventory of Mills and Quake. Darlene now followed Menace as they continued to move forward in the darkness of the alley with his pistols pointed straight ahead.

Mills and Quake sat nonchalantly as the police stared them in their eyes while passing. Mills spotted Menace and Darlene approaching from the corner of his eye. Menace was waving his hand as an order for Mills to move the van forward. Mills stomped the accelerator pedal and the van screeched forward.

The police in the passenger’s seat was pulling the car’s walkie-talkie to his mouth when he noticed Khalil pop up in front of their car. The driver’s body was turned sideways as he watched the van jump forward and stop. He turned in time to see Khalil rise up.

The two officers squirmed about like worms in the seat aggressively trying to blanket themselves from the fully automatic gunfire. They were struggling in a fidget to free their weapons when Menace darted closer.

Menace and Khalil hurried into the van. Khalil slammed the door closed and Mills floored it away from the scene.

“What happened? I heard three shots on the way back to the van,” Khalil said worried. “Y’all alright?”

“Yeah we had to rid ourselves of two strangers. The three shots came from Menace. He’ll kill a white man just as quickly as he’ll kill a brother,” Darlene told the group settling in her seat.

Menace slouched in his seat, he was breathing heavy from the run. Khalil reached over the seat giving Menace a pat on the shoulder. “You answered both of Mills questions tonight bruh.”

Get your copy here http://amzn.to/1DuvuUJ