How To Get Away With Murder- “He Has A Wife”

The latest episode of “How To Get Away With Murder,” finally gave us a glimpse of Lila Stangard’s side of things. We learn she had been having relationship troubles with Griffin and begun to see a married man. She refers to him as “Mr. Darcy,” which is what she calls Sam to keep his identity a secret. She Rebecca laugh about the whole ordeal over beers. In the present, Annalise learns from Bonnie that Lila was six weeks pregnant at the time of her death. Bonnie tries to dismiss herself after revealing the information, but Annalise insists she stay as a witness while she questions her cheating husband. Sam promises he did not know she was pregnant. She admonishes him for not using a condom and then goes into her bathroom. Elsewhere, Nate and Rebecca have formed an alliance. Desperate to get herself off the hook she agrees to help him get Sam’s phone.  The next morning, the law students discuss exams and work in the office. Annalise informs Wes about Lila. Naturally, he tells Rebecca, making her trust Annalise even less. 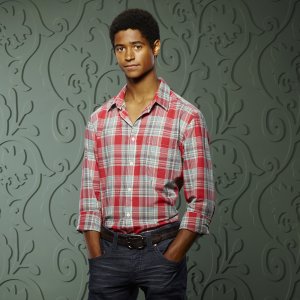 Rebecca goes by The Keatings’ home to try and search for Sam’s phone, but he answers the door. She pretends to be looking for her gloves, but he is not comfortable with her being there alone with him and demands she leave. Annalise takes on a client accused of murdering her live-in nanny. The twist is she is know to sleep walk, engaging in weird activities like sex, shopping, and cleaning while doing so. The students interview each of her family members and coach them on what to say if they have to take the stand. Nothing seems out of the ordinary beyond their extensive medicine cabinet. In court, Annalise seems to be winning, using her sleep walking defense until her client’s son reveals he has been having an affair with the nanny on the stand. Annalise angrily lashes out at Connor and Bonnie for not catching this beforehand.

The students continue to study for exams. Connor, Laurel, and Wes even form a study group after the former gets a copy of Annalise’s exam from the year before. Connor reveals he went to speak with the client’s son again and only learned he once received trichinosis from the nanny. Michaela immediately relaizes something that will win them the case and informs Bonnie. In court, Annalise places her client’s husband on the stand. He attests to his wife’s innocence and extreme sleep walking. Things change when Annalise reveals he too received trichinosis from the nanny after finding a prescription for it in his medicine cabinet and revealing he had prior knowledge of the affair between his son and the nanny. She accuses him of stabbing the nanny to death for betraying him and then showing his wife her bloodied body so that she would clean it up. He confesses and is arrested in the courthouse. Annalise’s client tries to admonish her for having her husband indicted, but she assures her in time she will thank her for what she has done.

Back at the office, Michaela insists Annalise get Asher to hand the trophy over to her for winning them the case. She tells her she cares nothing about the trophy, and before Michaela can insist she finds she has company–Aiden’s mother. They go to dinner together, there his mother demands she sign the pre-nup or there will be no wedding. Michaela refuses and endures a barrage of insults from her future mother-in-law. When she brings up her past she tries to slap her, but is stopped. The two women depart ways as enemies. Wes catches Rebecca getting out of Nate’s car and reveals he is Annalise’s boyfriend. They argue about her not being completely honest with him until they are interrupted by Connor and later Laurel’s arrival. The latter has learned Frank has a girlfriend and she is just the latest in a long line of students. Elsewhere, Michaela arrives at Asher’s home and tricks him into inviting her in. There, she steals the trophy. Bonnie and Sam have a heart to heart, she tells him she knows he was not at Yale the night of Lila’s murder. He asks that she have his back and he kisses her. Bonnie goes to Annalise and reveals the kiss to her as well as meeting Lila. She tells Annalise that Sam is not a good man. Annalise fires her. Sam arrives home to find his wife on the phone with the District Attorney’s office. She has just asked them to collect DNA from every man in Lila’s life including her teachers!

Annalise sure does endure a lot. Sam is a sidewinder with more side chicks than a rap star. The sway he has over these women puts Bella Swan’s swag to shame. Still, WHO KILLED SAM? Next week is the Winter Finale and I am ready to know what exactly happened and who did what! Either way it is going to be a nail biter!

Next Week—> The Winter Finale, Sam’s murderer is revealed!