Halsey has been making some major moves as of late. The pop-superstar has been navigating pregnancy and working on the release of a new visual project—”If I Can’t Have Love, I Want Power.” Like other pop-contemporaries, Beyonce and Katy Perry, Halsey understands the value of visuals. Assisted by iconic style and fashion architect Law Roach, Halsey took us back in time with the recent project from her visual album. Halsey’s film was released in IMAX on August 27th.  Stylist Law Roach worked to create looks by gathering pieces from designers like Stephane Rolland, John Galliano, Joyce Spakman and Vivienne Westwood. Roach is the stylist behind many of the iconic looks we’ve seen from celebs like Zendaya and Celine Dion.

Halsey is a style icon in the making and her new visual film is evidence of that. 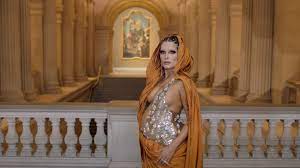 Visual albums and music videos have become a major component of an artist’s catalog, serving as a driving force that moves the focus of their music away from the album alone and propels their work into the pop-stratosphere through opulent visual erects, elaborate costumes and varying themes of drama and or comedy. The music video revival is something that I attribute to artists like Beyonce and Pink, but that’s a post for another day. Contemporary-pop phenom Halsey has definitely hit fashion milestone with the debut of her film. Sources say that Law Roach opted to pull vintage and historically inspired looks from designers, and worked to create a theme that grew with Halsey’s character throughout the film.