#KontrolReads Must Read: A Treacherous Hustle: The Falicia Blakely Story

“The devil made me do it,” some people proclaim when convicted of a heinous crime. In the case of nineteen-year-old Falicia Blakely, that statement couldn’t be truer. Born into a family bursting with dysfunction, the reluctant teen relocates to Atlanta, Georgia from Jacksonville, Florida, hoping to reconcile with her mother and enjoy a better life. The rebellious teen, driven by the all mighty dollar, gets caught up in a life too fast for her own good. She meets a slick-talking pimp and is instantly pressured to pursue a career as an exotic dancer. Falicia believes she has one up on the game until she encounters Mike, a hardcore hustler who shows her that she’s not about that life for real. For the love of her pimp, Falicia and an accomplice commit an atrocious evil—a triple homicide. All too late she realizes that manipulation, murder, and mayhem were all created by a savage, who still freely roams the streets of Atlanta 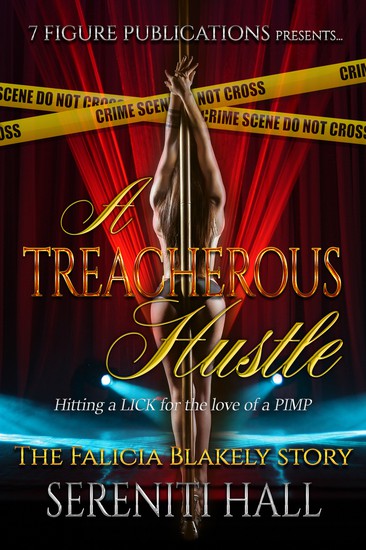 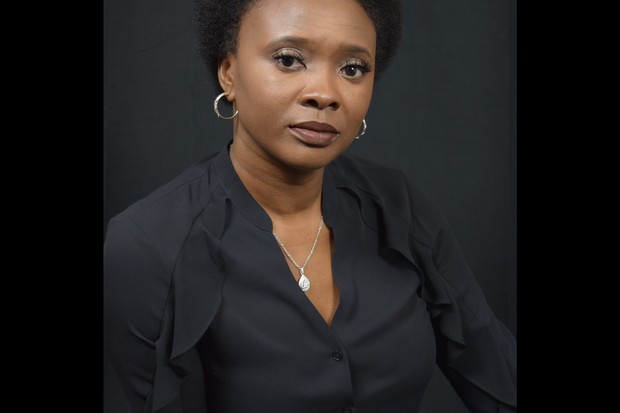 Sereniti Hall is an urban fiction author who pulls her creative juices and characters from everyday life, from the people, places, and things she’s seen and encountered. While serving time in Marianna Federal Prison Camp, Sereniti didn’t want to waste her time being idle and wanted to have a foundation to build on upon her release. After reading an urban fiction novel by the “Queen of Thug Fiction,” Wahida Clark and many others, Sereniti was inspired to begin her writing career shortly thereafter. She queried Ms. Clark, who signed her to a two book deal. And the rest, as they say, is her-story. In 2011, Sereniti Hall became the first Wahida Clark Publishing (WCP) author to have her novel Feenin’ listed as one of the top ten books for Street Literature in the Library Journal. Since then she has released the even hotter and banging sequel, Still Feenin’ along with her latest novel Traces Of My Blood and she continues to surprise her readers novel after novel. Although urban fiction sometimes gets a bad rap, Sereniti believes that urban fiction is a creative art and makes it clear that it is labeled as fiction, meaning not true. Mainstream videos and movies are also fiction and depict the same material, and Sereniti begs the question, what’s the difference with urban street literature? She wants the public at large to understand that urban fiction books aren’t a guide to living, but at the same time what she and many others write are like trumpets blowing to announce a serious message about consequences, no matter a person’s race, creed, nor color. Currently, she is working on her next project and resides with her husband and three daughters in Augusta, Georgia. Sereniti Hall has also written a nonfiction book titled Endless Tears under the name Dorothy Hall. In 2016 Sereniti Hall stepped it up a notch and is now the President and Co-Owner of 7 figure Publications LLC. Check out Sereniti’s website @ www.serenitihall.com www.7figurepublications.com

Bitter always came after the sweet.

“Sunshine, baby,” Mike chimed in, barely above a whisper.

“Daddy!” Falicia cooed into her cell phone. Excitement always filled her at the sound of his voice. “Where are you? And whose phone are you using?” She matched his tone.

“Check the move.” He ignored her questions. “Take care of that lil bit over there. Then meet me in the parking lot at Body Tapp.” As always, his tone was serious and direct when he gave orders. A cold silence lingered between them as Falicia tried to collect her confused thoughts. How had he gotten out of jail so fast?

“Just handle that, and let’s go, baby. It’ll be perfect. We’ll leave the Honda in the parking lot. Last time anybody seen you, you left the club with a trick. And very few know that I made bond. I’m just ready, Sunshine. Ready to get away from these ‘hos and start over.” It was everything Falicia wanted—to get back to life when it was only the two of them, well the three of them—Mike, her son Man, and Falicia, but one thing stood in their way.

“Daddy, I can just leave now and come straight to you.” She smiled, envisioning them driving away from all the drama in the ATL and into a new state and a new life.

“Naw, ma, get that money first,” he instructed.

She looked around the dining room of the man she intended to rob. The initial plan was to get enough money to bail Mike out of jail, who just so happened to be out already. “Well, now that you—”

“Just off the nigga and come on!” Mike said in a gruff voice.

The smile left her face as Falicia searched her brain for anything to change his mind. “He has a stick shift, Daddy. And I can’t drive a stick.”

“Then call me when you done. We’ll come pick you up.”

“He only got like $700. Maybe you should just try to get that and run.” She’d been through Joe’s wallet and had counted every bill. But she hadn’t taken any money out it. Not yet. She heard him approaching and quickly placed it back on the coffee table.

“You heard what I said.”

Shit! Falicia’s mind raced with apprehension. Her stomach churned. “But . . . there’s one more problem.” She glanced down the hall for any signs of Joe.

“What!” Mike didn’t seem moved in the least bit.

“Just before you called, he rolled me a joint and I was reaching inside my purse for a lite and my pistol went off. I didn’t even feel the trigger. I could’ve been shot, but the bullet went into the baseboard. And that shit got Joe shook. He was pacing and on edge and everything. It blowed me too. Maybe it’s a sign.”

“Sunshine, it’s a sign to go ahead and handle your business. Crazy shit always happens right before you’re about to take care of some real shit.” Mike didn’t understand.

“But Daddy. He was practically walking on egg shells. He asked me what the hell I was doing with a gun. His hand was shaking when he picked up my purse to put the safety on it.”

“What you tell that trick?”

“That I’m a female dancer and I sell dope. I would be stupid to be out here in these streets without one. Joe just shook his head and told me to be careful. I could tell he was spooked because he was still trembling. He just wentin the other room to snort some coke to calm down. I’m just waiting for him to finish.”

“A’ight. Perfect. Go ‘head and do that lil bit. Then come to daddy. If you need me to come get you, call me. Then start walking.” Mike ended the call. If it was possible, he would have heard Falicia swallow her fear.

As she waited for Joe to come back, not even fiveminutes later, her phone rang again.

“Uh, Unique, you ready?” Joe asked, calling Falicia by her stage name. His sudden presence startled her. She turned to find him standing there glassy-eyed with his thin, bare chest on display.

“Yeah,” Falicia replied, then pressed the end button on her phone and flashed him a nervous smile. How can I get this trick’s money without any blood spill? Joe let her lead him down the hall to his bedroom. “Oh wait! Let me go get my purse. I’ma put my phone in it so we won’t have any interruptions.” She rushed back to the living room and grabbed her purse off the table, dropping her phone inside. The pressure from Mike was getting to her. Briefly, she stared at the pistol. There’s no fuckin’ way I can kill this man. Fear of death, jail, and her own safety also threatened her mentally. She returned to the room. Her phone vibrated. Joe’s smile dissolved quickly when she snatched it out of her purse.

“Yes!” was all Falicia offered when she answered.

“What the fuck!” Mike screeched into the receiver. She peered over at Joe, paranoia setting in his eyes as he watched her every move.

“Now is not a good time,” she replied.

“I don’t give a fuck! Do you know I’m sitting out here in this parking lot waiting on you?” His voice boomed.

“I’m going to have to call you back.” Falicia hung upand turned to meet Joe’s cautious stare.

“Sorry about that,” she said. Joe glanced at her purse, looking more uncomfortable as he sat on the bed and removed his pants. She placed her purse on the nightstand and got in bed next to him. Again her phone vibrated. “Don’t worry, Joe. I’m not answering it. No interruptions,” she said, hoping to put his weary mind at ease.

The night proceeded into morning. By 6 a.m., Mike’s demand changed from “take care of the nigga” to just “bring your ass home.” He didn’t want to hear any explanations about why Falicia didn’t come through with the plan. Mike just wanted his bitch—Falicia—in his possession. In that instant, she knew this wouldn’t turn out good.

Joe had gotten dressed for work and he and Faliciawere in his Volvo driving down a cloudless I-285 toward her apartment. She wouldn’t be studying the shapes of each cloud and making them into what she wanted. Nomagic carpet or her own private jet to get the hell away from what she knew was coming when she got home. The uncomfortable rumbling in her stomach confirmed her fears.

Damn! She rubbed both arms, staring ahead. The sun beat against her skin, despite the cool air that seeped through the vents. Although Falicia wasn’t trapped, she couldn’t shake the suffocating feeling her anxiety brought on. She glanced at Joe, who kept his hands on the steering wheel at ten and two, staring ahead. She couldn’t read what he was thinking, but last night he clung to his wallet as if it was oxygen. Then again, Joe was just a coke-sniffing trick driving her back where he’d gotten her from, so his thoughts really didn’t matter. Money did. It’s the only thing that ever mattered.

Joe hit brakes suddenly. She noticed the traffic jamthey were in. Blocks later, she instructed Joe to, “Make a left right here,” as he entered Makana Ville.

Her heart beat rapidly and her palms moistened. Falicia’s mind raced with thoughts of slaps and body shots. He’s about to beat my ass! I know it! Once the car stopped in front of the walkway that led up to the entrance, she opened the door to Joe’s silver Volvo.

“If I never see you again,” she said calmly to the man whom she’d been exotic entertainment for and to whom she’d been selling cocaine for months. “Know that God was with you.”

“What?” Joe’s asked as he rubbed his shiny baldhead.His eyebrows bent as his puzzled eyes met the side of her expressionless face.

“I was supposed to kill you last night, Joe, and the fact that I didn’t may have cost me my life.” Tears threatened to fall, but she knew crying wouldn’t do any good.

His eyes widened as if a ghost sat beside him. “What! Unique, please get outta my car.”

Falicia grabbed her purse, her heart pumping fiercely with the same dread she was certain Joe now felt. As she stood and slammed the car door, she winced. Feeling Mike’s fist smash against her cheek before a single blow even landed against her face.