“This hasn’t been done before. This world is specifically Black Panther. Everything is different.”

Marija Abney is a triple threat.

With a background in acting, singing, and dancing, she embraces all of her creative talents with open arms.

If you aren’t familiar with Abney, get ready because she’s about to be everywhere. She’s set to reprise her role as a member of the all-female Wakandan special forces in the upcoming Avengers: Infinity War. She will even be showcasing her stunts in a few episodes of the new season of Luke Cage.

This month, she debuts in her new role as a member of the Dora Milaje in one of the most anticipated films of the year, Black Panther.

Just like the Dora Milaje that protect Black Panther, Abney brings her grace, strength, and fearlessness to the screen in one of her most dynamic roles yet.

We sat down with Marija Abney to discuss her experience on set, the buzz surrounding the film, and the impact of the release of Black Panther.

On First Experiences On Set

Black Panther is the first predominately African-American casted film releasing for the Marvel Cinematic Universe. Many die-hard comic fanatics have been speculating how the world of Wakanda will fit into the Marvel Universe.

Abney recalls that as she stepped on set, “[she knew] that [she was] apart of something that [was] absolutely epic.”

“It’s something that is uniquely Black Panther. I was fortunate enough to be on Avengers as well but the difference in the set is noticeable. The cultural difference in the set is noticeable so it’s something is very much for us […]. It was unapologetically of Black and African-American and African culture which I love. […] A lot of that remains in the movie. I’m so glad that they didn’t cut that part of it out. It’s telling our story. […] you definitely got a sense of the magnitude of the moment being on set.”

On The Dora Milaje

The Dora Milaje move as a strong sisterhood – in sync, together and as one. We asked Abney what it was like training to be a member of Black Panther’s elite bodyguards with such an amazing group of women.

She finds that the Dora Milaje mirror today’s image of the black woman.

On Her Prep For The Role

The role of the Dora Milaje is physically demanding. It requires high-energy and a large number of stunts.

As a self-proclaimed athletic dancer, Marija Abney enjoyed learning the stunts required for the Dora Milaje.

On the #MeToo Movement

Among the special effects and cool costumes, Wakanda serves as a backdrop for political commentary that applies to today’s social climate. One topic that continuously arises in the plot is the narrative of sisterhood through the solidarity of the Dora Milaje. The Dora Milaje act as a collective to not only protect Black Panther but to also look out for one another.

Abney parallels this storyline to the sisterhood that grew from #MeToo Movement that began late last year. Women from all disciplines, from Hollywood to our friends and family, took a stance against sexual assault and harassment using the #MeToo to showcase how common these cases are.

The campaign gained so much traction that Time Magazine honored the bravery of women all across the world for coming forward to break the silence of sexual harassment. The hashtag demonstrates that we were not alone in our experiences. It also shows how much work needs to be done in this country to make equality a reality.

“Being a woman in general, and not just a black woman, you have to deal with a lot of sexism. With the whole #MeToo Movement, I think with that being a strong movement as it is, I feel a sense of empowerment in those terms now. I feel empowered as a woman by so many women coming forth and saying this is what has happened to me. These are experiences that all women have had to some degree or another but with there being such a force I feel a sisterhood and a bond in that.”

On Working With Ruth E. Carter

I think we all can agree that the film is visually stunning. Creating the world of Wakanda would not have been possible without the elaborate costumes designed by the legendary Ruth E. Carter. She is known for her work on Selma, Roots and Malcolm X.

Marija raves about Carter’s impeccable creations and her design process.

“She’s amazing and so detail-oriented and absolutely down to earth. It’s incredible to watch her own a room. Occasionally, you would see, I happened to see, a man every now and again, challenge her in way in which she might not have felt it was appropriate and it was amazing to see her assert herself, not overly assert herself but assert herself with confidence and with authority in those moments without question”

Abney is at a loss for words for the visions she witnessed behind the scenes.

“The color palette, the research that she was doing, the storyboards were beautiful. Walking into the costume warehouse was just amazing. The pieces they had I can’t even describe what it was. It was amazing. The beadwork, the jewelry […] everything was amazing and every piece was picked out with an intention and had a specific tie to a tribe that was going to be featured in Black Panther.”

On Reactions From Viewers

Black Panther will undoubtedly mean so many different things to so many people. But the impact of young children being able to see themselves represented on screen as kings, queens and even superheroes is invaluable.

This message extends to young boys as well.

“Even little boys seeing a black superhero seeing yourself in that manner the impact I can’t even describe that impact. […] It’s beyond my imagination what that could do for a child. To see himself as a superhero, to see himself as a king.

“To see Africa this place that in the west and in America […] we tend to have such a negative opinion of but to see that this place is vibrant culturally. This place is a thriving civilization and it’s not backward […] It’s none of these things. This place has more technology than any other place in the world. To see Africa represented in the center is incredible”

On What She Learned While Filming

With a star-studded cast including Forest Whitaker, Lupita Nyong’o, and Chadwick Boseman, there was plenty to see on set. Abney shares two of the best lessons she learned while working on Black Panther.

“I was very fortunate to be able to watch so much happen around me and to watch Angela Basset through her process and to watch Forest Whitaker.  And I’ve worked with them once before to see how different their processes are but how committed they are to their processes so I would say my biggest [takeaways] are to always learn whenever you can [and] always observe whenever you can. But really find a process that works for you and stick to your process.”

On Her Most Memorable Moments

It’s no surprise that after working on a film so closely, castmates become family. We asked Marija Abney what her most unforgettable moment was while filming.

On What She Hope People Will Take Away From The Movie

The sci-fi action film surpassed predictions for ticket sales by a landslide even before the movie theater release. In just the first 24 hours of advanced ticket sales alone, Fandango reports that Black Panther exhibited the largest sales it has ever seen for a Marvel Studios release.

Abney believes that this alone showcases the value of representing diversity in mainstream media. She hopes that Hollywood takes into account the overwhelming support of this film as it moves forward with future projects.

“The value of representing black people on screen […] They didn’t know how it was going to do. But the fact that it’s outsold, in presales, every other superhero movie is pretty amazing. So, I hope Hollywood really takes that into account when casting, when pitching movies, when choosing which movies are going to get funding, […], when greenlighting their next project, I hope that has a huge effect on Hollywood.”

For moviegoers, her hope is simple.

“In terms of audience members going to see it, I hope people take a sense of pride away from it. We do not come from sh*thole countries. We come from amazing cultures. we are amazing brilliant people and we need to realize that. Our heritage is something to be extremely proud of. So, I hope that this movie encourages that.”

What’s Next For Marija Abney

Although Abney was hush on mentions for a sequel to this introductory film into the world of Wakanda, she hopes to rejoin the cast for a future part two of the series.

In the meantime, Abney is looking to return to Broadway in a new musical project or showcase her talents on a TV screen. 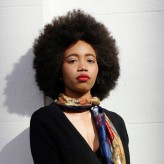 Alexis Atkins graduated from the Savannah College of Art and Design with a BFA in fashion marketing and management. When she’s not producing content for Kontrol Magazine, you can find her scrolling through YouTube for new web series to watch, taste-testing new recipes in her kitchen or searching the vintage racks to add unique pieces to her closet. For more follow her on Instagram @StyleFromAlexis.

Clean and Cute with CoCo Kisses