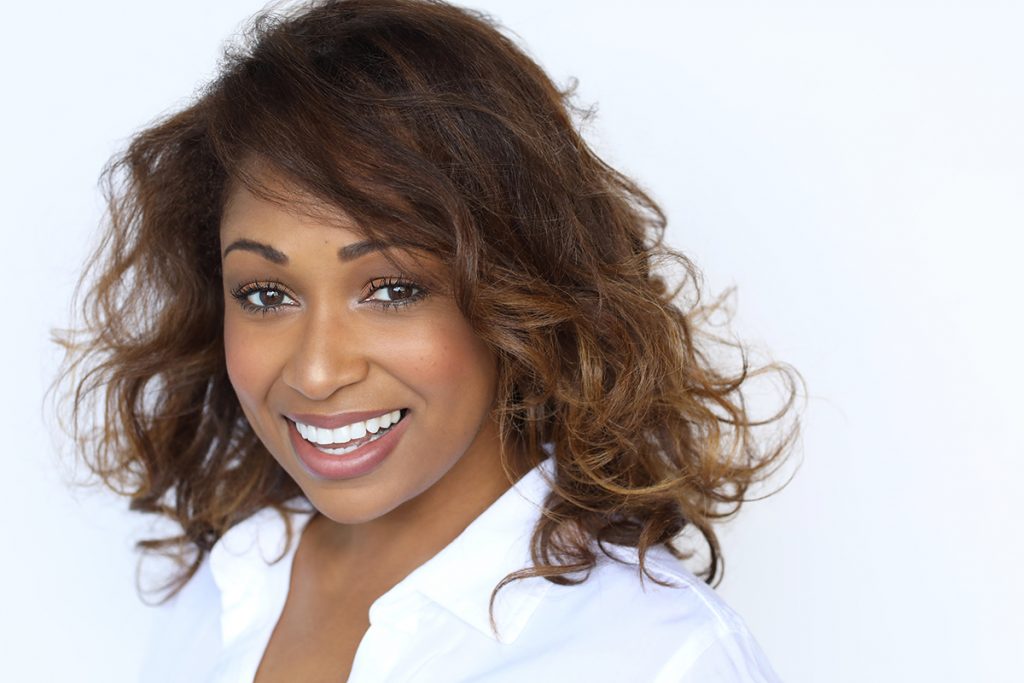 In our youth, we’re introduced into a number of things we have the possibility to grow into and grow up to be. Attorney, and actress on the rise, Chanté Bowser, dug her head into the books, and voice and physique into music, which would soon become the leeway to her greatest passion.

In due time, singing Tevin Campbell’s “Tomorrow,” in family talent show competitions, and being a part of the masterminds behind harmless musical skits, would turn into being inspired by the story of Dorothy Dandridge and setting off into Browser creating her own journey through Hollywood.

Dandridge is one of her greatest pioneers to look upon in the industry, in addition to Academy Award-winning actress Viola Davis, and Golden Globe winner and Academy Award nominee, Taraji P.Henson. “All because they’re strong women, and they all have amazing stories about how they got where they are. When you look at their level of success and think about what they had to go through to get there, those are the three I would say stuck with me. My acting coach actually lives under Dorothy Dandridge’s house. So whenever I go to Hollywood Hills to coach, I kind of just go stand under her house and see if I can take in any residual energy she has left. I know it sounds creepy [laughs], but just that energy to be in that same air. I’ve been in Viola’s space twice and just to breathe the same air they breathe, it’s amazing.”

Among graduating college for her law degree, the original plan into making it in the real world, she completed the California bar as a way to further her connection into the entertainment industry. Bowser passed with flying colors, becoming an entertainment lawyer, but dodging the city of angels as she decided to remain in the east coast.

This would give her the opportunity to take greater action into doing what she loves; acting.

“They’re [Dandridge, Davis, and Henson] strong women, and they all have amazing stories about how they got where they are. When you look at their level of success and think about what they had to go through to get there, those are the three I would say stuck with me.”

Auditions and acting classes were the next steps, and a transition from the original goal of Indie films, to television. Bowser said she owes a lot of completing acting classes and having access to additional resources to maintain her “starving actress” lifestyle, to the extra funding being an attorney delivered for her. “I didn’t realize until I decided to move to California in 2015 how everything connected. When I took the bar, I didn’t know how it would feed me. Acting doesn’t pay until you hit a certain level, it doesn’t pay to survive, so you have to have your survival job so being a lawyer would be my survival job. So I work as an attorney, I have my license, it enables me to be able to do things some of my fellow actors cannot do because of budget constraints. I can take more classes, the more expensive classes with the more expensive teachers because I have a financial resource with me being a lawyer. I am truly grateful. I don’t think anybody realizes why we do the things we do, but I see now why every decision I made led me exactly to this moment. Good or bad, and that’s what makes it all worth it.”

Although she possessed the income needed to better herself within this new field, Bowser still found it a challenge that she didn’t have the training anyone recognized. Even with being accepted into a professional program for television and film actors at UCLA, and studying with notable acting coach Lesly Kahn, Bowser felt a distinction and loss of a relatable connection with actors who spent their 20s in L.A. strengthening their craft, while she was in law school.

However, her experiences weren’t any less than what she observed from her surroundings. Bowser was able to rigorously hold her own, participating in classes with screen gems like Jennifer Aniston and Jason Bateman as her teachers, and more recently supporting alongside Taraji P.Henson and Sam Rockwell in Robin Bissell’s “Best of Enemies.”The most defining moment was working with Taraji and Sam Rockwell. That was amazing, I cried. Robin the director, and the head cinematographer [David Lanzenberg], they were amazing. I literally cried that in my own universe that was a shift. To be able to be across from two amazing actors that I’ve watched on television and movies. To be able to have lines against them. Sam Rockwell gave me a hug after, and I was like “Oh my God, this man is hugging me,” I don’t even know how to feel about this right now. I am going to cry. Here is this Oscar-winning actor who’s giving me a hug, and he said: “Thank you for being so generous.” That’s a thing another actor, even just somebody who’s not on his caliber to say to you, “Thank you for being generous.” Like wow, Sam Rockwell just said that to me, can I get it in a recording? Can we do that again? Can I put my camera up? That would have to be the biggest moment of my life, thus far.”

“I don’t think anybody realizes why we do the things we do, but I see now why every decision I made led me exactly to this moment. Good or bad, and that’s what makes it all worth it.”

The term “This is my year,” couldn’t be any more literal than it is for Bowser. Along with her supporting role to Henson and Rockwell, Bowser will also star as a lead in Bishop John Wynn’s “Mirror Mirror,” which focuses on the story of the church’s leaders and presenting a false persona of who they want to appear to be, rather than who they are. The film features a hefty lineup of talent, including The Walking Dead’s, Vincent Ward, soap opera star, Judie Evans, and the multi-faceted, Noel Gugliemi.

Also in the first quarter of the new year, viewers can also catch Bowser in Dally and Spanky, where she portrays the teacher of the lead character and Disney star, Brenna D’Amico. “I just want people, with these projects coming out this year, to see me as a multi-faceted actor who can lead movies, who can be in movies against people who have much longer resumes as me, and I can hold my own. That’s really the goal for 2019, for people to see that I am more than just a lawyer and a guest star actor, and that I can hold my own. I had a lot of leads in Indie Films, and nobody cares about them unless they make it to SXSW or Sundance. So I had to start from the bottom when I started auditioning in Atlanta and L.A. I didn’t put in the work in L.A. as other people have, but I hope these films will show that I can do that lead work on more than just an indie level. It’s in my prayer book! And God’s hands.”

Like many up and coming actors and actresses securing their mark on the big screen, or those, in general, planting the seed that’ll allow them to bloom, Bowser believes self-care is essential in regrouping emotions and a piece of mind. “I’m so much of an extrovert, introvert. I really like being by myself. I’m on what I need to be on, then I’m exhausted and want to go home and lock myself in the house for like 48 hours. Okay, maybe not 48, [laughs] but like 24 hours. I got to a point in my life where everybody else’s happiness should not trump mine, and everybody else wanting to do something does not trump mine, and in acting. You keep a lot of emotion bottled up and you need to sometimes get away and be centered. For me, I watch any cartoon I can find. Scooby Doo and The Flintstones.”

Bowser says the important advice she could give to those following similar paths as hers, is to “Don’t ever sit and think you’ve hit success where you are, because people are calling you to work. Make sure that work is pushing you to the next level. Or ask yourself is it stretching your instrument? And if it’s not, you have to find a way to make that happen.”

“That’s really the goal for 2019, for people to see that I am more than just a lawyer and a guest star actor, and that I can hold my own.”