Kelly Rowland has always been beautiful, and as of last year she is now a beautiful mom! However, glimpses of her son, Titan Jewell have been few and far in between. Well now Kelly has decided to share her little miracle with the world via the cover of Essence Magazine. Kelly, her husband Tim, and Titan appear to be one amazingly loving family. The two new parents are excited about the future and what it holds for their family.

In the interview, Kelly talks about being a wife, mother, and missing her own mother, Doris. As you recall her mother passed late last year. Still, the former Destiny’s Child member is strong and hints on a comeback with her music. During a Google Hangout last month she state: I am working on new music in the studio. The main thing I wanted to change with this album is–it’s not a major change, but it’s more uptempo. I wanted more tempo. Not necessarily dance tempo [because] I’m sure everybody is like, ‘Dance tempo?!’…but just tempo. Just more stuff that’ll get you right on the dance floor. Stuff that just feels good. So that’s what I’m working on now.”

We are sure her latest music venture will be as catchy and sexy as Talk A Good Game! Congratulations Kelly! 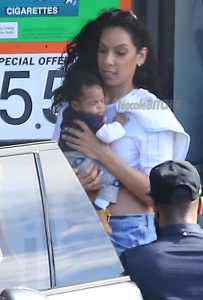