Nikki Burnett (also known as Nikki B.), star of the Lifetime show “Bringing Up Ballers,” has something to say and Kontrol is ready to listen. I had the pleasure of catching up with the multi-talented beauty, and she is as real as she is inspiring. Nikki grew up in Chicago’s housing projects, living a very different life than her son, high school basketball star Nimari Burnett, does today. When asked how that affected her as an adult, she says, “I grew up with little to no resources from my parents. My mom died from a drug overdose and I just knew I wanted to be different. Get married. Not have children out of wedlock. Just do things differently.”

“I definitely feel like I’m under more of a microscope. People who had nothing to say before all of a sudden have an opinion on how I live my life,” she says

And she did just that. Burnett has been in real estate for 12 years running the gamut from commercial and business to residential, a career the describes as “stressful but very rewarding.” When she’s not closing deals on houses, she’s working on her clothing lines, BasketballMom and HoopLegend, hosting events with the “Leading Ladies of Chicago” and inspiring women through the CEO Chicks Movement, a network of women entrepreneurs who meet across the nation,  founded by Colleen Arturo of Orlando. But Nikki’s biggest role is being an AAU basketball mom to her son, a task she has done for 13 years. And it looks as though her time invested will pay off, as her freshman son has already received offers from two Big 10 schools.

“Bringing Up Ballers” follows Nikki and her son, Nimari, who she keeps a “tight grip” on to protect him from the rise of inner city violence in the Chicago area. Along with 3 other moms of NBA hopefuls, including Peytyn Willborn, with whom she is developing a nonprofit organization that will help Chicago’s kids get off the streets. The show highlights these ladies on their day to day journeys to helping their children realize their hoop dreams. And while the show hasn’t seemed to phase Nikki or made her go “hollywood”  she says it has impacted her life in a few ways. “I definitely feel like I’m under more of a microscope. People who had nothing to say before all of a sudden have an opinion on how I live my life,” she says.

” I’m here to inspire those who didn’t have a supporting cast in their lives to get where they wanted to be. You have so much more to offer than posting naked pics on Instagram,” says Nikki.

But, ultimately she just hopes that the opportunity gives her a platform to send a message she has worked so hard to live out. The exposure on the show has, “made me fell like more of a role model,” she says, and something she takes very seriously. “So many women depend on men and their bodies to achieve their goals instead of working hard. I’ve always been a stickler for hard work and believed that through hard work, dedication, and faith anything is possible. I’m here to inspire those who didn’t have a supporting cast in their lives to get where they wanted to be. You have so much more to offer than posting naked pics on Instagram,” says Nikki.

She said that! You catch Nikki on “Bringing Up Ballers” on Lifetime, at EssenceFest, Black Expo Atlanta and of course on instagram where you can keep up with all her adventures @shenikkib. 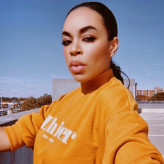 Girl Power: 5 Empowering Female TV Shows You Should Be Watching

Sizzle of the Week-Darian “D” Barnes