Is Porsha Williams No Longer On Real Housewives of Atlanta?

That certainly seems to be the case! Porsha Williams  posted the following picture to her Instagram :

“No more peach for me, but I still love checking in with my girls” #Blessed #SomethingMajor #JustHereToSlay #TeamPorsha ”

This is disappointing news to all the Real Housewives of Atlanta fans.  It’s unknown if Porsha was fired because of the huge debacle with Kenya Moore on the reunion or if she’s leaving on her own free will.

Bravo Media’s favorite Georgia Peaches return juicier than ever when season seven of “The Real Housewives of Atlanta” premieres on Sunday, November 9 at 8pm ET/PT. Cynthia Bailey, Kandi Burruss, NeNe Leakes, Kenya Moore and Phaedra Parks are back this season, and joined by media maven Claudia Jordan as they foster new friendships and attempt to rebuild old ones. Also returning in a recurring role is Porsha Williams and newcomer Demetria McKinney. Fresh off performing in Las Vegas as Cirque du Soleil’s mistress of ceremonies in “Zumanity,” NeNe has recently launched her own clothing line and will be heading to the Broadway stage to star in “Cinderella.” Recently married, Kandi attempts to build her expanded family with Todd, but faces unexpected road blocks along the way. 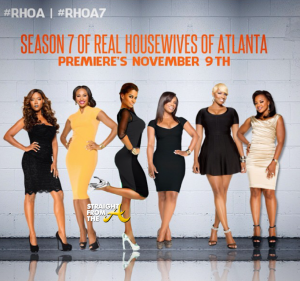 Meanwhile, Kenya focuses on her producing career and can’t shake the thoughts that a baby is what is missing most from her life. Always on the go, Cynthia is now stronger than ever both on the health front as well as with her marriage; the only thing missing is not having former BFF NeNe by her side. With Apollo facing years of incarceration, Phaedra shows incredible resilience while raising two young boys on her own and maintaining her successful career. Claudia Jordan is a TV and radio host who recently moved to Atlanta from Los Angeles. Working as co-host on the “Rickey Smiley Morning Show,” Claudia loves the social scene Atlanta has to offer and having her good friend Kenya Moore around. Recently single, Porsha is enjoying a fresh chapter in her life and joins “Dish Nation” as its Entertainment gossip contributor. Award winning actress and singer Demetria McKinney is also new to the mix and getting up to speed with these sassy Southern ladies. (Source)

View the trailer below!

Don’t fret because you can still catch her on television!  Porsha is now a co-host on the entertainment magazine program, Dish Nation.  Alongside the Rickey Smiley Morning Show, Porsha dishes on celebrity news and gossip.

When one door closes, another opens.  Good luck in all your future endeavors, Porsha!