Take kontrol of your thoughts 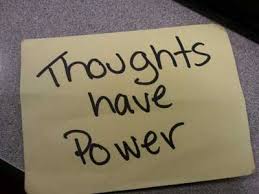 Never underestimate how impactful your way of thinking actually is. Don’t think it’s cliché when people exclaim this.  Living in the real world, I know you don’t have  time for glittery contemplations while your  reality is a  humdrum habitat.  But dwelling on the bad is equivalent to inviting  havoc and  ill aura into your space without uttering a word. Many are  smiling and joking on the outside but their insides are a fortress of discontentment, regret and fear.  They bombard themselves with questions:  Will I ever be good enough?  Pretty enough? Smart enough? They’re internally browbeating themselves with what-ifs and scenarios that will probably never manifest in real life because this unconquerable  nemesis only exists in their mind.

It may sound odd but this is a common problem for some.   If you want to rid yourself from a state of discontentment, the first step is choosing not to believe everything you think.  The mind can be cruel but only with your permission. It has the propensity to steal your joy, hope and assurance in the blink of an eye.  You must learn to replace every negative thought with a positive FACT about yourself.  And when that becomes cumbersome, replace it with an affirmation of faith.  But you must remember that faith without works in dead so truly believe it!  Think and speak it with conviction and watch miracles began to unfold all around you.

Another very important step is learning to give the person in the mirror a break.  While we can be our biggest cheerleader, we can also be our own worst enemy.  It’s okay to make mistakes, as we learn through error.  The only mistake is being scared to make one.  And it’s fine to be concerned with the unknown.  It can definitely be a scary notion but give that feeling a fleeting moment and get back to concentrating on the present because it’s the only thing you have control over.

Last, change your self-perspective.  Believe in your ability to be great.   Yes, you are enough! Don’t compare yourself to the next person because you have no idea what their struggle is behind closed doors.   Every morning, plant a seed of positivity to shine through the dark crevices of your mind.  Remember, a positive mind equals a positive life.  There really is power in your thoughts so learn how to KONTROL them!