Claudia Jordan, the newest Real Housewife of Atlanta, continues to settle into her new high rise apartment. She invites Kenya over to visit and put together furniture with her.  There, the two bond over strained relationships with their mothers. Claudia reveals her uneasy past and the issues surrounding her biracial identity. Kenya informs her the other ladies believe Apollo is lying about lying that Kenya met up with him in Los Angeles two years ago. Claudia offers her support and promises to have her back. Elsewhere, Kandi and Todd go to visit her old home that she originally gave her mother. They find the property in disrepair and with unfinished renovations done by her mother’s boyfriend. Todd wonders when his wife will have enough and hold her mother accountable for all of her misdeeds.

Later, Kandi visits Phaedra while the latter prepares homemade guacamole. She tells her friend about Kenya’s reaction to the other ladies’ theory about Apollo still  not really telling the truth. She wants to get all the ladies together for dinner so that they can hash out their differences and move forward. Phaedra reluctantly agrees to come, but still thinks no better of Kenya due to other negative interactions between the two of them. Cynthia vents to her mother, sister, and husband about Nene’s latest interview and bad mouthing her. She declares their friendship is over and a series of event, not just her calling Peter a bitch, snowballed to cause the demise of their relationship. Nene, however, does not seem bothered with any drama and instead goes with Greg as they teach their youngest son, Brent, how to drive. Greg hilariously, and wisely, covers himself in sports padding and armor! Kandi has lunch with her aunts and tells them about her house. She still wants to rent or lease it out but knows there are thousands of dollars worth of damage done to the house. Nora and Bertha feel Joyce’s boyfriend should pay for the damages and wonder how her new marriage will fair with her now living down the street. 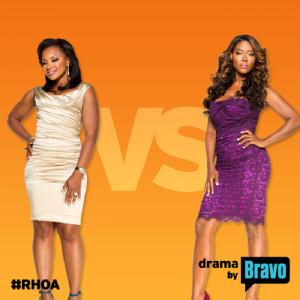 All the ladies (minus Claudia) arrive at Kandi’s dinner at Einstein’s restaurant. The gathering begins nicely with everyone at the very least acknowledging one another. Kandi announces the purpose of the dinner and hopes everyone will use this opportunity to move on. Kenya begins by declaring she feels she is owed an apology since it is now revealed Apollo lied. Phaedra, however, refuses to hear her out and tells her she still feels as though she is a slut and a whore. She refuses to apologize to her for anything. Kenya is clearly hurt, but Porsha surprisingly tells the table anyone who wants to apologize to Kenya can do so without any ill feelings from everyone else. Phaedra, “on the record,” tells Kenya she holds no ill will against her and the “slate is wiped clean.” Kenya does not feel that is a real apology. Kandi encourages Cynthia and Nene to talk, but the latter goes in! Nene declares Cynthia to be a fake friend who blindsided her with betrayal. She feels she was nothing but a sister to her and promises to leave the remnants of their relationship at the table. Cynthia, who can barely get a word in, is surprisingly poised.

There seems to be a “streak of fake” when it came to most of the ladies tonight. In fact the only genuine women  were Claudia and Nene. I was glad to learn more about Claudia’s past and her biracial identity. I can imagine that was hard trying to relate the issues surrounding her ethnicity to her Italian born White mother. Nene let Cynthia have it and she brought up some valid points! I would not have blindsided someone I consider a good friend during a reality show’s reunion special. Furthermore, where’s the gusto she had when Porsha came for her. It would have been nice to see “Super Cynthia” tonight. Mousy is not a good look for you anymore Ms. Bailey. Cynthia admits to letting a lot of things slide during their friendship and honestly that’s her fault. It is a common fact that we dictate how people treat us. As for Kandi, she needs to stop playing the peacemaker. Her mediation skills are shit! If any mediating needs to be done it is between her mother and Todd. With Miss Sharon’s recent demise there must be no more petty conflict in the family. As the wife and daughter in this situation I need her to be more proactive!