Sanaa Lathan had the world googly eyed when she took to IG to reveal her shaved head using hashtag #NappilyEverAfter.

It looks as if she had great reason for shaving her head. She is starring in the book turned movie, Nappily Every After!

According to ETONLINE, “In Nappily Ever After, Lathan plays Violet, a woman who has a seemingly flawless life until an accident at her hair dresser causes her life to unravel. Violet starts to realize that she hasn’t been living the life she really wanted — and with the help of a barber and his young daughter, works up the courage to cast off some of the things she didn’t really need, like her perfectly straightened hair”.

Lathan, has been using her social media platform to document her character Violets hair journey in the movie.

We no longer live in a “you need long hair to beautiful” world. More and more women are shaving their heads and not thinking twice about it.

When a woman shaves off her hair, the only thing that I can say is, look out world, she’s woke!

Prior to Lathan’s big chop reveal, there were a few other celebrities that were already sporting the look.

Have you ever thought about shaving your own head? If so, why? If you haven’t acted on the thought yet, will you?

Its so inspiring to see women embracing their natural beauty. A woman’s natural beauty has nothing to do with her hair, for it is skin deep!

With no hair to hide from “imperfections” or “flaws” there will lie a beautiful woman! 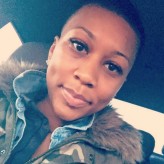