The CW has truly become the hub of the superhero television genre! First Arrow, then Flash, iZombie and Legends of Tomorrow, and now Hawkgirl is in development! Yep, the Golden Age of Heroes has been resurrected via television and we could not be happier. Fans of Arrow will be pleased to know its roster of heroes and villains will each increase by one next season with the addition of two lesser known characters–Mr. Terrific and Anarky! 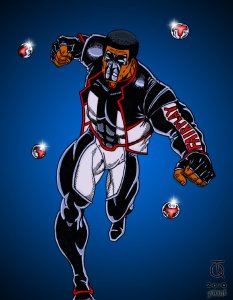 Mr. Terrific is one of the most brilliant men in DC Comics, described as the third smartest man on Earth. He is armed with “T-Spheres,” floating robotic spheres that have multiple functions and follow his mental commands. He is also invisible to all technology thanks to the nanotechnology in his costume, and a martial arts master. As a member of The Justice Society of America (JSA) he has gone up against some of the most dangerous villains in the universe. Actor and comedian, Echo Kellum (Ben and Kate, Sean Saves The World) has been cast in the role. We are not sure how good of a decision this is since this is his first serious role, let alone superhero one. Let’s hope they keep his demeanor closer to his comic roots and not make him a buffoon. He will work under Ray Palmer at his company.

Anarky is traditionally a Batman villain, but will fit in well at Starling City, which is pretty much a Gotham City ripoff. This villain is actually a child prodigy who compensates his lack of super powers with an arsenal of gadgets. He functions as a hired gun in the next season of the show. Anarky is becoming a fan favorite among Batman die hards. It is rumored The Caped Crusader will be facing him in his next stand alone film. Yet another former Nickelodeon star, Alexander Calvert (The Troop, To Be Fat Like Me, The Dead Zone)has been cast for the role.