Whoever said fame favors the fortunate has never traveled to the great state of Alabama, or known what it means to come from nothing to be a great something. If that is the case, then you also know they never met the amazingly talented DJ Josh Acoff. Yep, DJ Acoff is man of many titles– a rising star, aspiring actor, one of the most popular young DJs in the industry, and an all-around great guy. Josh has a story tell, dared to be better than his circumstances, and now stands on the cusp of a future so bright it might as well be highlighted with a neon marker! “I know who I am, who I am meant to be, and where I’m going. You can’t let your past dictate how far your future is gonna go…”

As aforementioned, DJ Acoff rose from less than humble beginnings in Alabama, in the city of Birmingham. There, he was one twenty-one children to a big time drug dealer in the area. “I’m the fifth oldest out everyone…my father was killed when I was young so I didn’t know him too well…but I know of all my siblings…” Acoff was raised by his single mother alongside two of his siblings. He was determined very early on not to follow in his father’s footsteps and be someone others could admire and look up to. “He’s my father and I love him, but that is not what I wanted for my life…a lot of young men would try to emulate that, but that type of life just has you locked up or dead…” DJ Acoff has always used his natural talents to move forward in life. It was his natural athleticism and affinity for football that earned him a full scholarship to Alabama State, and later, Clark Atlanta University.

There, he remained until his family began to experience financial hardships when his mother lost her job. Selflessly, he returned home to assist his family with the bills. He took up a job at KFC to make ends meet. His luck changed forever, however, when he received a refund check of $4K from Alabama State. “When I got it, I was excited, but I knew I had to be smart about what to use it for. I gave half of it to my mom to help her and the other half I decided to invest in some DJ equipment….you already know that two thousand dollars won’t really get you what you need like speakers, turntables, records…so I went to a pawn shop where I know they were selling Mac laptops for like fifteen hundred dollars…I must’ve been talking loud because this guy that was in there asked me to come talk to him outside. There, he showed me some brand new Mac Books he was selling for five hundred dollars! They were the kind that all the DJs use to mix music.” 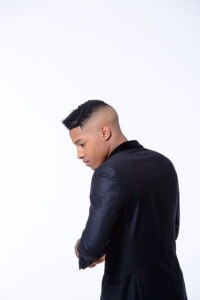 Josh later discovered the refund check was a mistake and that it had to be paid back. He decided to DJ parties to make the money back. Not only was he that good at DJ-ing—with no formal training—his skills and popularity garnered the attention of the student body which led to him being hired for more parties and events. He really knew he was making it when he began to be paid big bucks to host and DJ events for professional athletes and celebrities. Josh’s hard work has paid off and now he is considered one of the most sought after and popular young DJs in the industry. “You get out what you put in and that’s what I’m doing—putting in the work!” Perhaps that is why his first mixtape is entitled THE WERK, featuring some of the industry’s hottest rappers and entertainers. Recently he has put out a sophomore mixtape, The Come Up.  Some DJs seem to be off when it comes to making a mixtape that flows, but thankfully Mr. Acoff is gifted. “I’ve always had a good ear for music and what should follow what…my song choices really just come to me and whatever the vibe is I just go with it…”

Although he is an amazing DJ there is still more to this handsome face than just turntable and mixing. Josh aspires to be the next Denzel and is seriously pursuing his acting career. He has already been in a short film and is soon to take acting classes in Atlanta. “Acting is really what I’m moving towards…I think I have done just about everything I can with DJ-ing, and that’s what I really want to do…I’m not going to stop doing it [being a DJ] immediately though, it’s been an excellent platform and I’ve benefited a lot from it…” Mr. Acoff’s ambitions continue to climb as he is now the ambassador for Livello, a Men’s Fashion brand. As you can see, whether he is rocking the turntable, reading scripts, or making the runway a little hotter, Josh Acoff is a man of substance and success. Barely twenty, he lives by the motto; “Age doesn’t define maturity, experience does…” Just let that sink in! You can keep up with Josh Acoff by following him on Twitter/Instagram @Dj_acoff.

WHO AM I? That’s probably what you’re thinking? It’s simple I’m this generation’s “Dear Abby!” I was raised in the Fourth Ward of Atlanta, educated in the School of Hard Knocks, and rescued by the concrete and steel of New York City. Life at best will always be bittersweet. The sooner you accept that, the better off you’ll be. I’d prefer to be on your sweeter side. Everyone needs a listening ear, extra shoulder, and open arms when life gets rough. I’m your new best friend, whe it all goes south remember I’m a mouse click or tweet away. Hang in there kids, you’re gonna love kickin’ it with me!!! -MIKEY

Gotham- “Rise of The Villains: The Last Laugh”