The Haves & The Have Nots begins with Hanna and Benny awake to their first morning at the new house. Hanna slept well, but Benny is troubled, concerned his sister acquired the house through false means. Hanna tells him she appreciates the home, but loves hers more since she has spent so many years paying for it and living there. She questions him about Veronica, but he tries to lie and say he is not still seeing her. Finally he admits to still hooking up with her, claiming he is a man and cannot help himself when she is “throwing out there” at him. Hanna admonishes her son for his weakness and then questions how he got the tow yard and the house thinking she got it for him. She senses something is awry with their new found possessions. Hanna warns him about everything that is going on and tells him she will not be coming back to the new house.

At The Cryers, Katheryn finds that Wyatt has not slept in his bed and becomes worried. Jim however is not bothered. She questions him about their son’s whereabouts, what else Celine can reveal, and why he attacked Veronica. He promises her he is handling everything, and refuses to tell her about Veronica’s actions. She promises to find out on her own, to which he has no problem with. At the Sarandon, Jeffrey tries to help Wyatt but he accuses him of trying to come on to him. Jeffrey demands he stop mistreating and demeaning him. Wyatt tells him he was raped in prison and blames his father what has happened to him. He leaves angrily.

Candice calls her brother to see how he slept at the new house. Candice surprises Oliver with breakfast, but he does not have time to eat as he has to catch a flight to Paris. He invites her to come with him, but she realizes she has to focus on her son. He tells her he is not good at saying goodbyes, but will see her in a few days. They agree to see other people while they are apart from each other, but she promises soon he will be hers alone. Elsewhere, Benny receives Candice’s voice mail, but notices Hanna did not drive the car he gave her to the hospital. She tells him she won’t be coming back to his house that night and is sure she will be safe at her own home. Meanwhile, Quincy drives a car into her home, decimating it and causing it to burst in flames!

At the campaign office, Maggie shows Jim his concession speech, but he instead tries to come on to her telling her he is horny and wants to bend her over his desk! At the hospital, Leah, the social worker meets with Hanna and receives a phone call from Benny. He reveals he knows that she could not verify Candice’s job. She is upset with Hanna for telling him, but gives him as much information as she can without betraying Candice’s privacy further. Leah admonishes Hanna for telling Benny about Candice’s job. Hanna apologizes not wanting to upset her. Elsewhere, Benny goes to Candice’s “job” and learns she has duped him. Jim goes to Celine’s home and demands to see her. He reveals he pays her a whopping $275K/year just to be his maid. He admonishes her for revealing their secret. He calls her a weak, concubine whore and tells her there is no man of substance who will ever deal with her. He tells her he once loved her, but she refused to “play her position.” He blames her for the demise of their relationship and demands to know what she wants from him. She begs him for an apology and tells him to make love to her. He refuses and leaves. 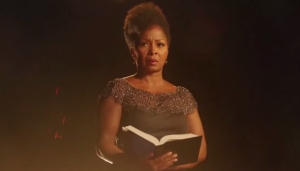 Katheryn enjoys a work out with her trainer, Marco. She later confides in Hanna she is ready to do something for herself. Their girl talk is interrupted when Veronica comes to visit. Marco flirts with Veronica, just before Hanna confronts her about having sex with her son. Veronica dismisses and talks down to her, demanding to know what her trump card is. Hanna threatens to beat her down out front and Veronica calls her bluff. Quincy arrives at the hospital to see Q and tries to take him. When Leah tries to stop him he chokes her and pushes her down in the chair. He goes through her bag and looks at her paperwork. He kisses Q on the forehead and leaves. One of Hanna’s neighbors calls her and tells her about her home being on fire. Veronica pokes fun at her misfortune. Maggie reveals Jim’s antics to David. She realizes he should run for governor without Jim. She tells him now is his time, but he is hesitant. Hanna arrives to find her home is gone, she is overwhelmed with emotion.

Karla Mosley--Bold, Beautiful, & On The Right Side of Equality!

Another Speedster!? Check Out The Season 2 Trailer for The CW’s The Flash!