After 10 years of putting his solo career dreams on hold, singer-songwriter, TJ Jackson, is ready to regain his staple on the future of R&B.

TJ Jackson’s thirteenth year was spent watching his uncle, the legend we know as “The King of Pop,” Michael Jackson on his 1992 to 1993 Dangerous World Tour in Asia. Still, he and his brothers’ lives remained nothing short of normal and especially with the specialized additions that come with being born into a legacy.

Raised by the late Delores “Dee Dee” Jackson and Hall of Fame guitarist and member of the Jackson 5 father, Tito Jackson, who because of his musical accolades, such as being a part of one of the greatest music groups in history, school nights turned into concert nights for the boys more often than not. ”Music was all around me. We used to go to the studio all the time with my father and my uncles and watch them behind the scenes making amazing music and that was what we wanted to do as kids. That’s what we spent our free time doing, acting like our father and uncles, with mops and brooms and just trying to mimic them. The crucial moment for my brothers and I was in 92’ where we went to the Dangerous Tour with my uncle Michael in Asia. I was at that 13 or 14-year-old age, and just seeing the connection my uncle had with so many fans, 10 of thousands of fans, hundreds and thousands of fans and they didn’t even speak English–seeing that power in a positive way, not abusive power; seeing that connection was incredibly inspiring for me, and from that moment on, I knew that music was something that I would definitely want to be a part of. There’s nothing that replaces that feeling of inspiring listeners and being the soundtrack of their life.”

It would just be a few years later where TJ, Tariano, and Taryll, would go on to form 3T, an R&B and pop-influenced vocal group destined to turn their lives around in ways they would’ve never imagined.

Under the mentorship of their uncle Michael and signees to his then label, MJJ Entertainment, the trio birthed three studio albums including memorable hits like “Why” “Anything,” “24/7,” “Stuck on You” and more.

The group reached the height of international success, touring overseas and proudly securing the accomplishment of surpassing Boyz II Men and Babyface in overseas sales, and coming second to the Spice Girls as the biggest group in Europe back in 97.’ ”I think what I’ve learned the most being in 3T is that you have to savor the moment. That time period was such a magical time period, especially when we first started out. I was sixteen years old, touring throughout the world, and in a way, I kind of took it for granted. I always figured that I would always be back, I could see museums, or take a walk, or see other countries around the world in the future as I could always do it later. But looking back, that’s something I wish I would’ve done–slowed down the moment. But then again, I was sixteen so how did I know that? What’s propelled me going forward, what I take with me now, is just the importance of doing something strong and making sure I’m enjoying it. I enjoyed my time with 3T, but it seems like now doing this project is even more enjoyable because I’m really able to connect with my fans, and I’m really able to do my thing. In 3T I was one of three, but this project its all me and it’s kind of liberating that way.

“There’s nothing that replaces that feeling of inspiring listeners and being the soundtrack of their life.”

This time period for Jackson was one filled with a series of defining events. His alternative direction of passion besides his childhood dream of playing major league baseball, which he received scholarships for, was business, and both were put on pause due to the band’s consistent traveling across the world. He was even accepted into one of the top acclaimed business schools in the country and encouraged by his uncle to attend, but didn’t.

However, it was the loss of his mother before the debut of 3T’s take-off into superstardom that shifted Jackson’s life. He remembers her for the greater good she implemented into the lives of her family and those around her and continues those exact attributes to keep her spirit alive through the Dee Dee Jackson Foundation. “My mother was everything. What she really helped me with was being a good person. I just did a TV show, and someone from the network had known my mother, or met my mother and just gave me an amazing memory to hold on to and I get that all the time. It’s a testament, and it makes me feel good because I lost her at a young age, so those kinds of memories help me keep some form of my mother together for me. It’s just really good to know my mother lived life right and was always helping people and always giving back and that’s what I try to do today. My brothers and I started the Dee Dee Jackson Foundation, which is basically that, helping people navigate through loss and grief. We do a radio show every Wednesday called “A Child’s Love,” and it’s just trying to spread more love and positivity in the world. That to me is something my mother was about and something I’ll always try to set examples by in my life and in honor of her.”

TJ is now embracing his very own fruition within his life by returning with a new and improved solo music career. Something he labels as having to put on hold in order to navigate a stable life for his family is making a comeback in the boldest way possible. 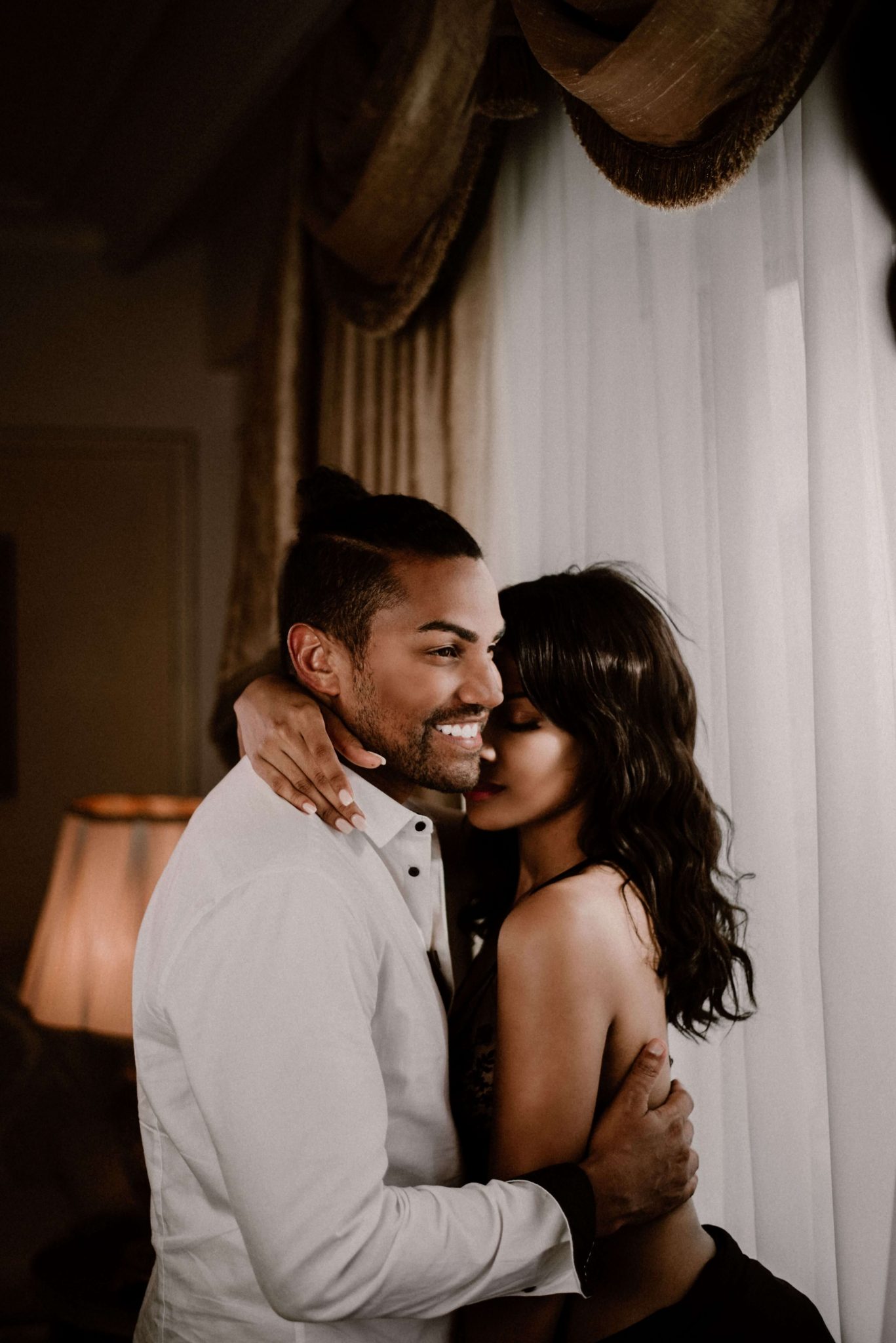 “What’s propelled me going forward, what I take with me now, is just the importance of doing something strong and making sure I’m enjoying it.”

On September 6, the singer released his new single “Insomnia,” a smooth R&B track that serves as a metaphor for the endless nights that come with the feeling of being in love. Two weeks later Jackson would release the as sensual video, displaying in a black and white fashion the passion of a lover’s crusade. “I aspire to create a good experience for my fans. They’re the main source of inspiration for me as a musician, to do it publicly at least. I believe in the power of music and I believe it can really contribute to someone’s life and I’m hoping I can do it as great as I can for anyone who’s listening. For me as a musician, it was important to do something [“Insomnia”] that was 90s R&B based because I feel as though that’s an avenue of music that has been neglected and I think it’s a very great and powerful part, it’s a great sound. I wanted to do something that kind of paid homage to it and was still modern but felt current. Conceptually, I’m big on writing personal experiences, not that every song I’ve written is a personal experience, but “Insomnia” is a personal experience. It was one of those times where my wife is experiencing an amazing time together, a time where we couldn’t sleep or didn’t want to go to sleep. I thought it would be cool to write about that and kind of twist the words and reshape the connotation that insomnia gives because most people think its a negative thing. It can also be a positive side of it and a beautiful thing.”

Jackson’s aspiration to keep the authentic style of R&b alive roots from his all-time inspirations of Motown artists, including Smokey Robinson and Lionel Richie. He recounts a recent run-in with Robinson, who he says greeted him with a big hug and further proves his humbleness and extension to the Jackson family.

TJ manages to acknowledge the influence and talent of the new school too. He cosigns for artists like Daniel Caesar, Khalid, and Leon Bridges; three of the members from the new generation making a name for themselves in the industry. “R&B is rebirthing right now. There’s some great R&B talent that’s getting some love and it’s a beautiful thing because I think R&B music is incredibly strong and will never go away. Hip-Hop has really taken a toll on the whole world and soundscape. I’m just happy to see some R&B influence coming back and it’s so important. There are kids nowadays who don’t even know what a slow jam is, to me there are consequences from that, there are repercussions. There’s nothing like R&B music. I think it’s also because of the streaming platform, it’s allowed everyone to be seen and heard.”

“For me as a musician, it was important to do something [“Insomnia”] that was 90s R&B based because I feel as though that’s an avenue of music that has been neglected and I think it’s a very great and powerful part, it’s a great sound. I wanted to do something that kind of paid homage to it and was still modern but felt current.”

Although his primary focus is music, Jackson’s family remains number one. Even with the launch of his solo career, his priority remains to maintain the balance between being available and on time for his family, while also growing within his artistry. As a husband, father of five and now having guardianship over his niece and nephews, Paris, Prince, and Blanket, he gives props to technology for playing a great role in staying connected with his loved ones while away from home.

Jackson also credits his grandmother,  Katherine Jackson, as the glue that holds all the pieces together; a teacher of life and his angel here on earth. “To me, she’s the queen. She’s the definition of love. I’ve learned so much from being her grandson and I’m lucky to have her. When I lost my mother she was a huge piece of stabilizing myself and helping me. That unconditional love that a grandmother can give all the time, you don’t really realize the importance and power of it but as I got older, especially seeing with my cousins what my grandmother means, she’s everything and I’ll always respect, honor and cherish that I’m her grandson.”

TJ Jackson is a man of many mantras. With his own real-estate-company under his belt, exercising his interest and skills in business, and also opening a new door into the acting world with an upcoming cameo appearance in the BET film, The Influencer, this year going into the next looks pretty promising.

Fans can look forward to the 2020 release of Jackson’s Last Nights EP, described as different from the 3T sound and a representation of where he is now in life. “When you practice gratitude it really contributes to your life, it really gives extra meaning and purpose and strength and happiness to it. I think it’s played the biggest role to me, it’s really something that has helped me be grounded and know that you cannot control everything and to be appreciative of where you’re at. That’s where I’m at and it feels great.”

Keep up with TJ Jackson on Instagram @tjjackson9 and check out his new single and video for “Insomnia” below!