No one is immune to failure, not even blockbuster movie star, Will Smith. Easily one of the highest paid celebrities on the planet, Smith admits to finding himself in pain over the failure of his  2013 film After Earth. Will is so disenchanted with the film that he considers his other failed blockbuster Wild Wild West to be better. He recently spoke to Esquire concerning the whole debacle and what that failure has taught him.

Speaking to Esquire, Smith was reminded of a quote from his TV aunt on The Fresh Prince of Bel-Air: “Don’t let success go to your head and success go to your heart.” The quote prompted Smith to recall the lesson he learned following After Earth’s poor box office numbers. “I never would have looked at myself in that way. I was a guy who, when I was 15, my girlfriend cheated on me, and I decided that if I was number one, no woman would ever cheat on me,” Smith said. “All I have to do is make sure that no one’s ever better than me, and I’ll have the love that my heart yearns for. And I never released that and moved into a mature way of looking at the world and my artistry and love until the failure of ‘After Earth,’ when I had to accept that it’s not a good source of creation.” 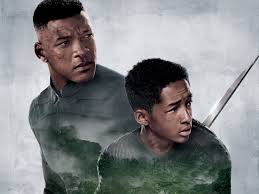 As aforementioned Will feels Wild Wild West was less painful because he did not “drag” his son, Jaden, into that one. Thankfully and unfortunately, even worst news put everything into perspective for him when he learned his father had cancer. According to Smith, he learned of his father’s cancer diagnosis just minutes after hearing of After Earth’s low box office numbers. “That Monday started the new phase of my life, a new concept: Only love is going to fill that hole,” said Smith. “The only thing that will ever satiate that existential thirst is love.” Will Smith has a new movie premiering, Focus, on February 27th. You can check out the trailer for it below! In it he will be starring alongside his Suicide Squad co-star, Margot Robbie. Let’s hope it will not flop!

WHO AM I? That’s probably what you’re thinking? It’s simple I’m this generation’s “Dear Abby!” I was raised in the Fourth Ward of Atlanta, educated in the School of Hard Knocks, and rescued by the concrete and steel of New York City. Life at best will always be bittersweet. The sooner you accept that, the better off you’ll be. I’d prefer to be on your sweeter side. Everyone needs a listening ear, extra shoulder, and open arms when life gets rough. I’m your new best friend, whe it all goes south remember I’m a mouse click or tweet away. Hang in there kids, you’re gonna love kickin’ it with me!!! -MIKEY

Michelle Williams is Saddened by a few "Christians!" Find Out Why!